The past few weeks have been hectic. I had a hospital appointment when we got back from Seahouses, and came away with a date for my hip replacement surgery - 20th June! Which was wonderful and terrifying in equal measures, especially as we had just arranged for a bathroom and downstairs loo refurbishment to take place in late July/early August. The timing will be far from ideal, but what doesn't kill you makes you stronger... allegedly. Recovery post-op takes around 6-12 weeks and there were lots of loose ends to tie up at work so as not to leave too much of a tangle for the rest of my team to deal with while I'm gone. I ended up booking some leave for the pre-op period so that I could literally and metaphorically get my house in order - with so much to do at work there wasn't time to draw breath, let alone prepare myself for major surgery.

The past week has been a mixture of "jobs I won't be able to do for a while after the op" - taking the car to the garage for repairs and the XXSCat dog to the vet for annual vaccinations, emptying our glass recycling bins at the dump, and cutting the hedges - interspersed with bouts of cleaning, tidying, laundry and anxious list-making. I had hoped to do some relaxing and unwinding too, but it turns out that (for me) getting ready for an operation feels very similar to preparing to go on holiday (I suffer from Pre-Holiday Dread Syndrome). Essentially this means stress levels increase exponentially right up to the point that the car leaves the driveway (or the anaesthetic knocks me out) and there's no choice but to surrender to whatever comes next! So rather than feeling serene and well-rested, at this point I actually feel completely frazzled.

Creative activities have helped to distract me a little, and will hopefully help a lot more in the weeks to come. The dolly below belongs to my friend's great niece, who lives in Poland. She is a wistful little thing who apparently has only one item of clothing to fit her - some well-worn pyjama bottoms! 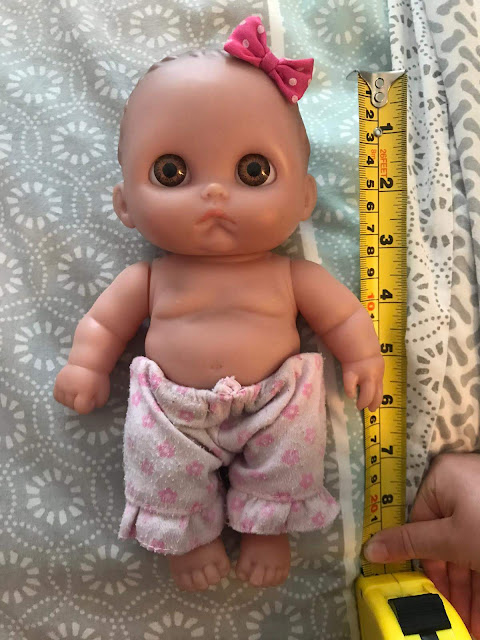 I have been working on a new wardrobe for her, using my own thuggish-looking baby as a model. When I was trying to find a doll with similar measurements to the photo I discovered that although their faces are very different, their bodies are identical - literally cast from the same mould. I have been promising poor thug baby a wooly hat and cardigan ever since I rescued her from the charity shop, so I will make her a set of her own once I've finished the emergency clothing parcel for her Polish twin. I'm not sure that red is really her colour though - perhaps a soft violet would bring out the blue in her fierce little eyes. 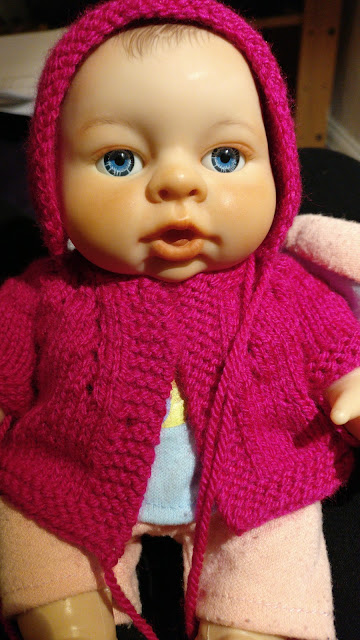 I did a bit of decorative patching on some comfy new jeans - they are intentionally well-worn, vintage-looking, and came with an artful rip in the right knee which (apart from being annoying to wear) was just a bit too "out there" for someone in their mid-fifties, even if I am a bit of an aging hippy type. I didn't have the patience to mark grid-lines, so the stitching isn't perfect, but I really like the effect. 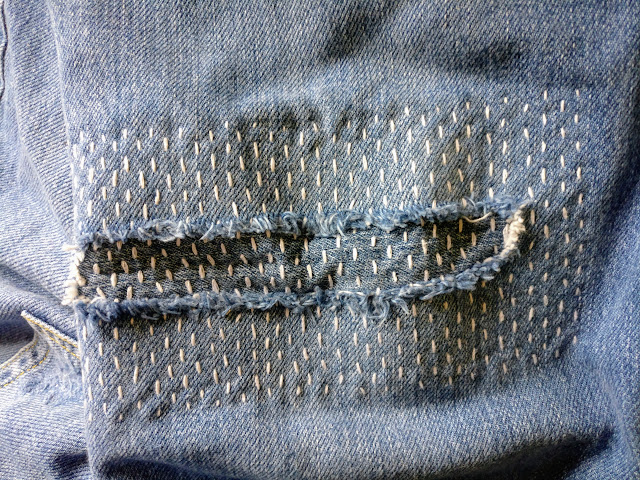 I also embarked on what was intended to be a post-op long term project to use up all the random double-knitting yarn that has accumulated in my stash over the years - a rainbow coloured mini-mania-scarf blanket! This was (almost) a complete failure. Not only did I end up buying MORE double-knitting yarn in order to complete the rainbow spectrum (little or no red, orange or yellow-green in my stash to begin with) but after a couple of rainbow sequence repeats I realised that it was going to be far too garish bright for an entire blanket. So I cast off and turned it back into a scarf. Which I actually really love, but may have to wait a while to leave the house in, as my husband's tactful response was, "Hmmm. It is quite bright - maybe you should save it to wear in winter, to cheer you up!" Unfortunately he followed this up with a far less tactful remark - "It's a bit Tom Baker in Dr Who!" A quick Google search might have told him that it's actually far more Jodie Whittaker in Dr Who, but nvertheless, point taken, it's quite high on the quirky spectrum . 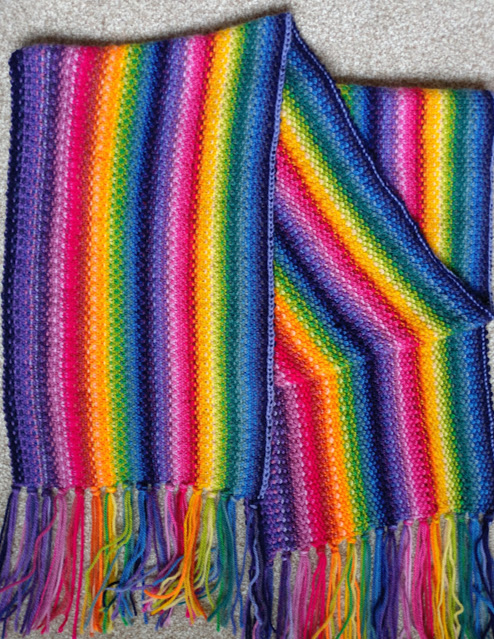 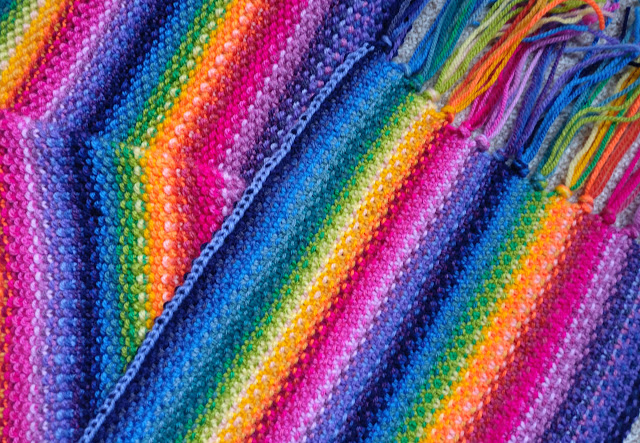 I started work on some painted pebble place settings for my daughter's friend's wedding in July. She wants 25 in total, and I've completed 4 so far. I think this will be a good project for post-op convalescing. I'd just spray varnished the Groom pebble in the photo below - it has a matt finish like the Bride's when dry. 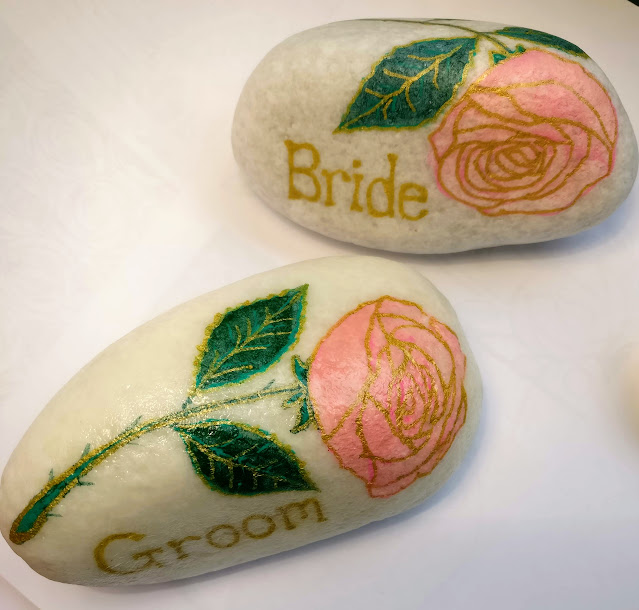 There was also great excitement last week when my friend had a Little Free Library box installed outside her house. This is a wonderful, positive, community-based project which has resulted in a growing network of Little Free Libraries across the city. Our excitement was bittersweet because the lovely lady who championed the scheme in Leeds died (after a long illness) just a few days before the box was installed. This was the last box she decorated (it's a beauty!) and we hope to honour her memory by keeping its shelves well stocked for many years to come. 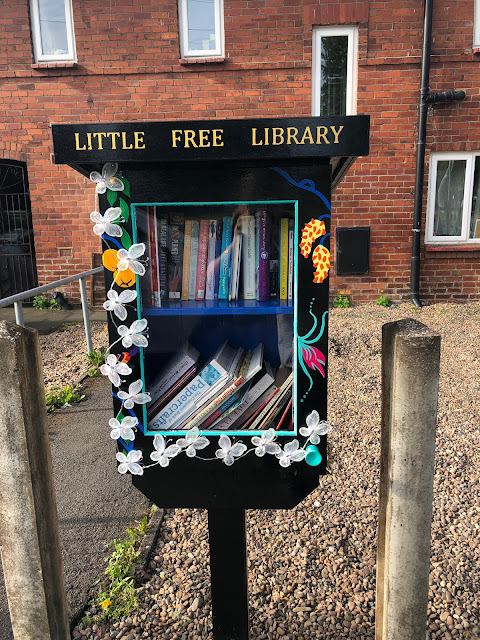 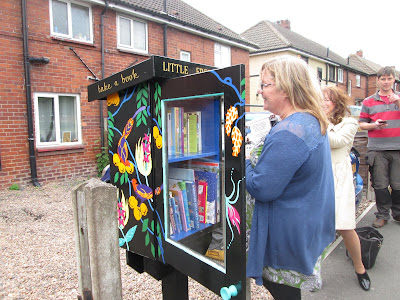