When I made the 'Extra Pocket' bags for my friends recently, I asked my daughter if she would like one, and she said she thought she would, but preferably with a zip, and possibly another (double Extra?) pocket...
I can't recall inserting a zip into anything since my 'O' level needlework days, when I would think nothing of running myself up a shirt, or a skirt or a jacket on the sewing machine. Try as I might, when I was pondering the construction in my head, I couldn't quite figure out the correct order in which to add the zip, the strap and the lining without ending up with a raw edge somewhere on the inside. So I turned to the interweb and soon came across this lovely video tutorial by Michelle Wootton, which worked for me and took all (well, almost all) of the brain-ache out of it. You just have to trust the instructions and follow them to the letter, even when you're not sure how they're actually going to work. I made some notes as I watched the video, but still had to go back and re-watch the final step where five layers are sandwiched and stitched together, turned inside out and then pulled backwards through the open zip.  Like a magician pulling a rabbit out of an empty hat this sleight of hand reveals a perfectly finished (apart from 3" of handstitching to close the gap in the bottom lining) 'Extra Pocket with an Extra Pocket and a Zip' bag! Hooray! 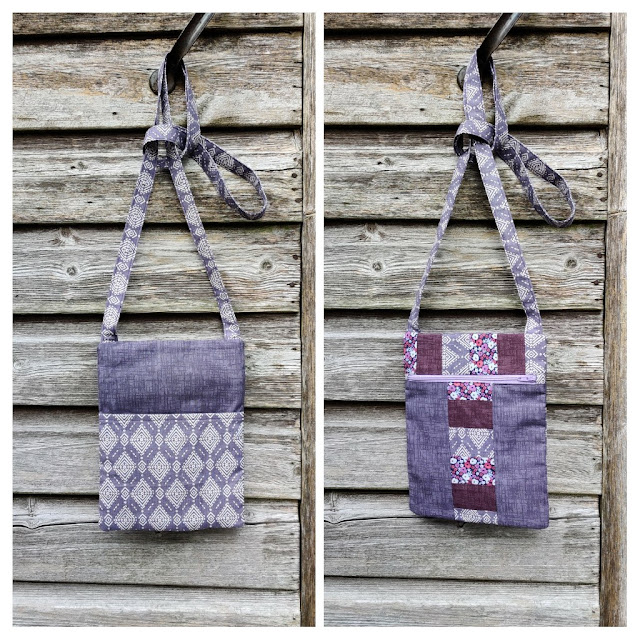 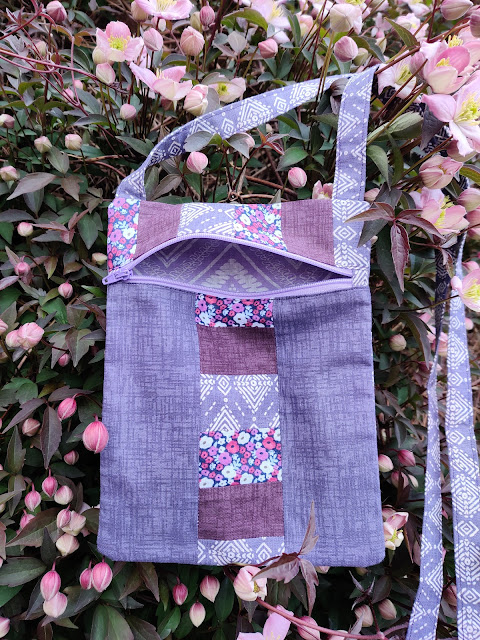 Next up, my husband commissioned some custom counters for a football board game he plays over Zoom with his brother. He sawed 12mm diameter dowel into 1 cm lengths which I then sanded, painted and varnished in the specified team colours - apparently the Home and Away strips of their youthful 5-aside football team, "The Slayers"! Fiddly work, but fun to see the delight on the face of the 40+ year old recipient! 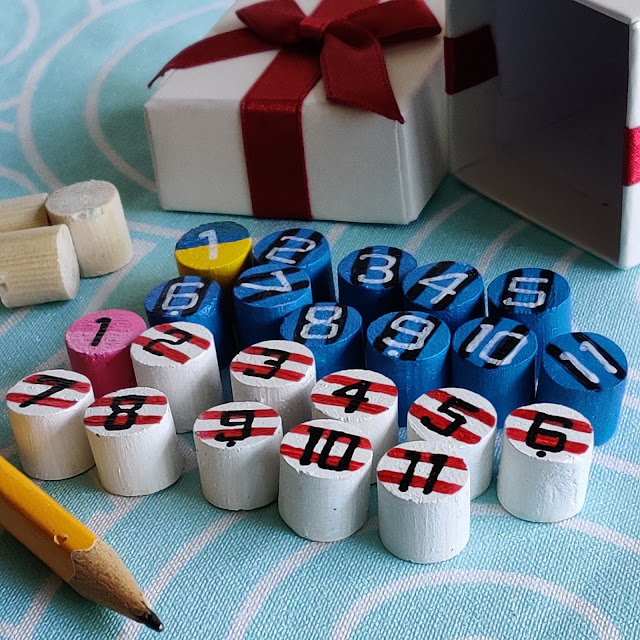 ...and finally, the garden gnome population has been forming an orderly queue for a much-needed repair and rejuvenation operation - I didn't get a 'before' picture of this 'Scary Vampire' Minion, but here he is halfway through his repaint, getting his hands glued back on... 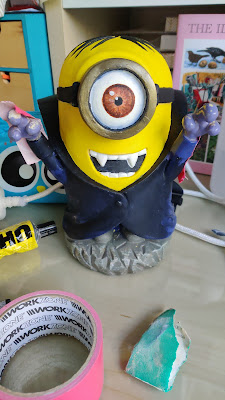 ...and here he is back in the Fright Business, sneaking up behind his long-suffering and decidedly un-spooked buddy (although he is looking a little pale and flaky by comparison). 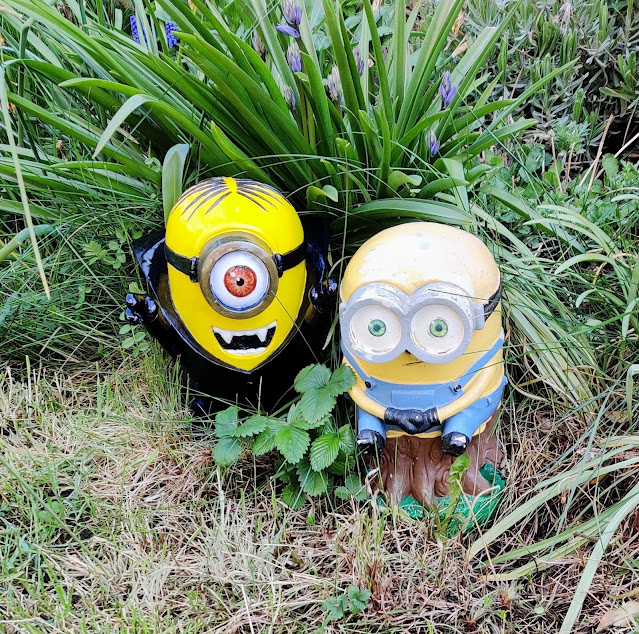 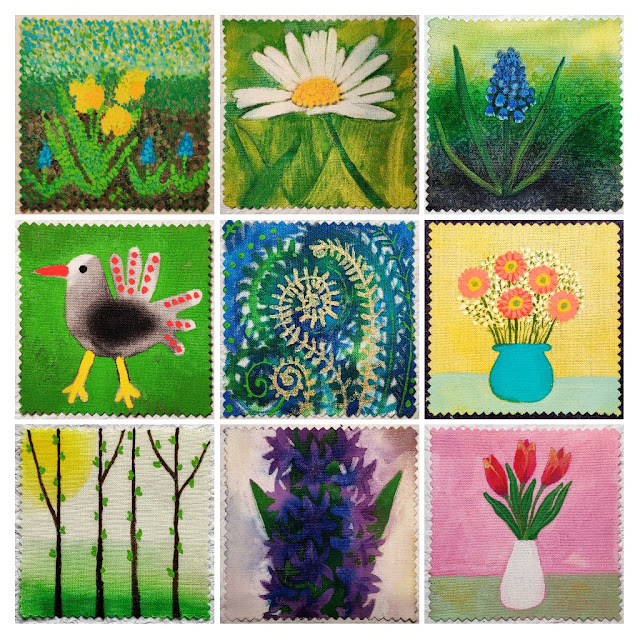 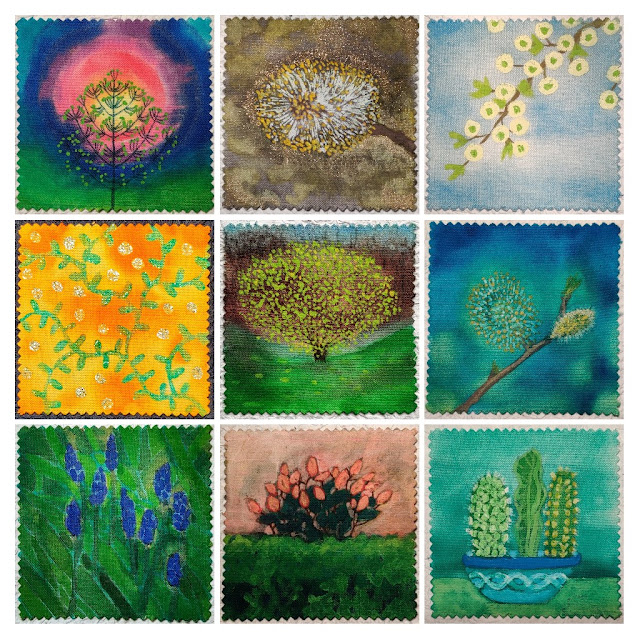 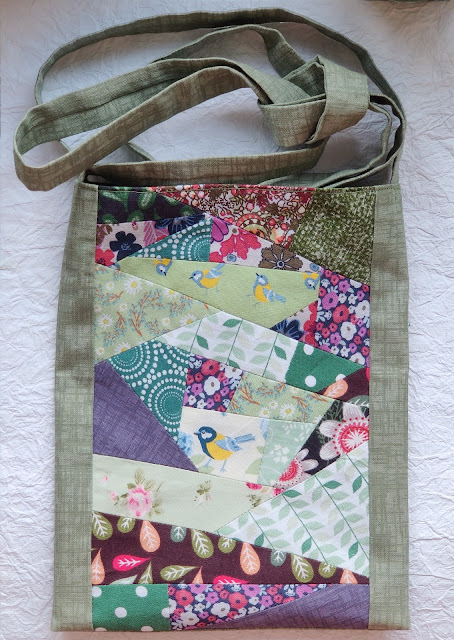 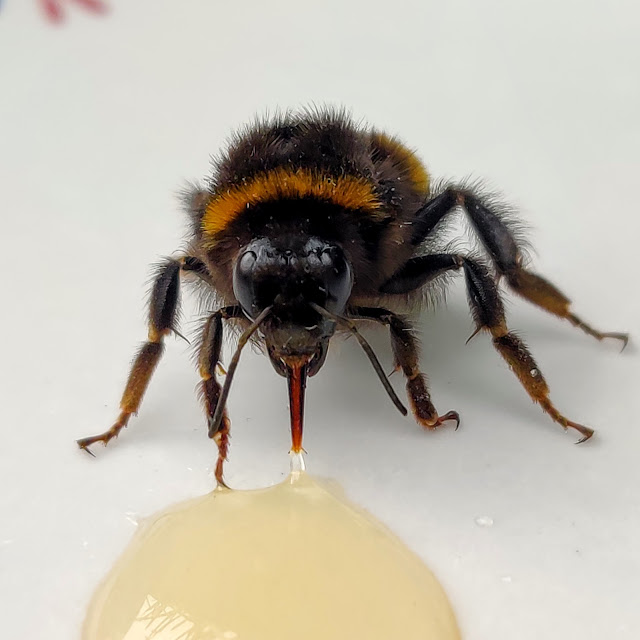 I really wasn't sure he would recover, as he'd seemed so weak, but after about 15 minutes he began crawling away across the saucer, so I moved it next to a little clump of violas, and was thrilled to see him start clambering from flower to flower and then take flight (with a trademark buzz) to a neighbouring hyacinth. Saving the planet, one bee at a time! 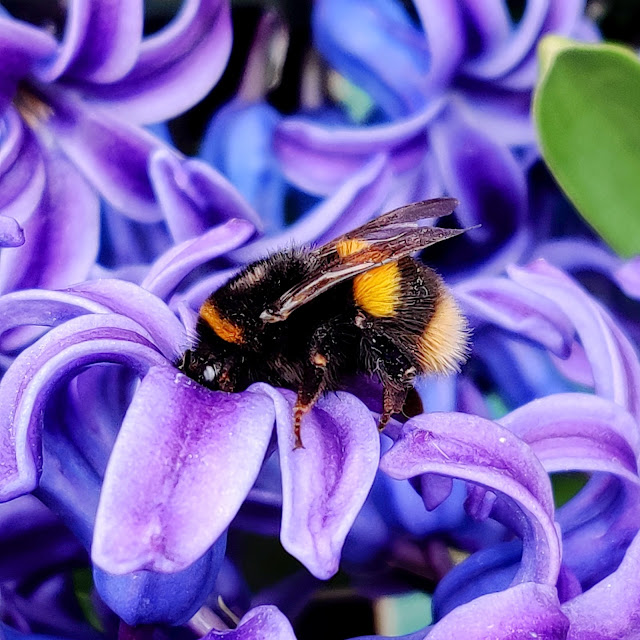 Extra Pocket Bag
Noun
Definition: A simple rectangular bag, dimensions similar to a decent-sized pocket, with a long strap allowing it to be worn securely across the body.
I am not a handbag aficionado. In my world bags are for lugging essential stuff from A to B when pockets are not big enough or available, so the bags I own are as follows: one leather satchel-like manbag bought from the Next for Men section (sturdy, practical, but quite heavy); one medium-sized lightweight canvas shoulder bag with 50 million pockets (I once literally lost my car-keys in it because they had inadvertently found their way into a pocket within a pocket that I didn't know existed); and (see below) one black, crocheted-with-sequins, 'going out' bag, bought from Accessorize 30+ years ago (so technically 'vintage'), which is just big enough for keys, phone, money, an eyeliner pencil and a little mirror.
I love this bag. It's a little faded, but still going strong, and it is a fine example of what I call the 'Extra Pocket Bag' - in fact , it actually goes above and beyond, because it has a zip top for extra security. No-one wants to lose their favourite eyeliner pencil on a wild night out! 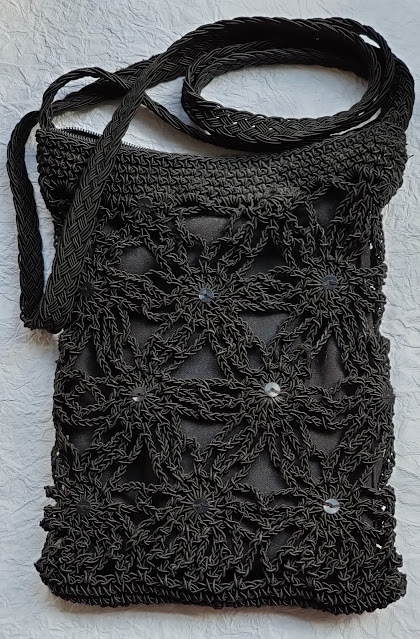 At some point a few years ago I decided to knit myself a casual version of my beloved Extra Pocket Bag, using some denim-coloured cotton yarn from the stash. Very plain, stocking stitch with a garter stitch edging and an i-cord strap, it hung around in a nearly-finished state in my work basket until Covid 19 came along and I realised it would be perfect for weekly shopping trips - just the right size for a shopping list and pen, my phone, card wallet, a mask and a little bottle of hand sanitiser. So I finished the i-cord strap, made a simple patchwork lining to help it keep its shape, and it has done absolutely sterling duty all year. Every time I leave the house I just slip it over my head and I'm ready to go. So when my friend said, on a recent socially-distanced dog-walk, "I need a little bag like that!", I immediately said, "Well, I'll make you one!" 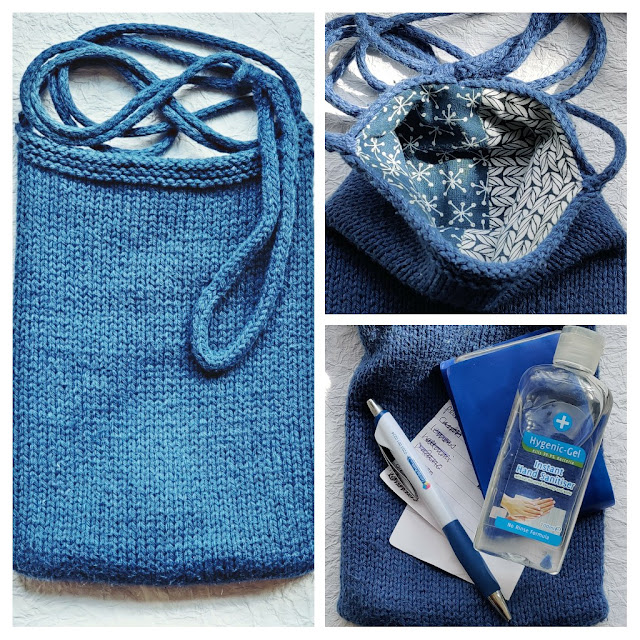 I could have knitted a similar one to mine, but all the mask-making I've done over the past year has left me with lots of pretty cotton scraps, and I've recently discovered a wildly enthusiastic lady on YouTube who posts brilliant videos about how to use up even the tiniest fabric remnants in all sorts of creative ways. I could watch these videos all day, but it's even more fun to DIY, so the little Extra Pocket Bag below, made with crumb patchwork panels on either side and a stripey lining, came together really quickly in a just a couple of hours. Simple, but effective, and ever so useful! 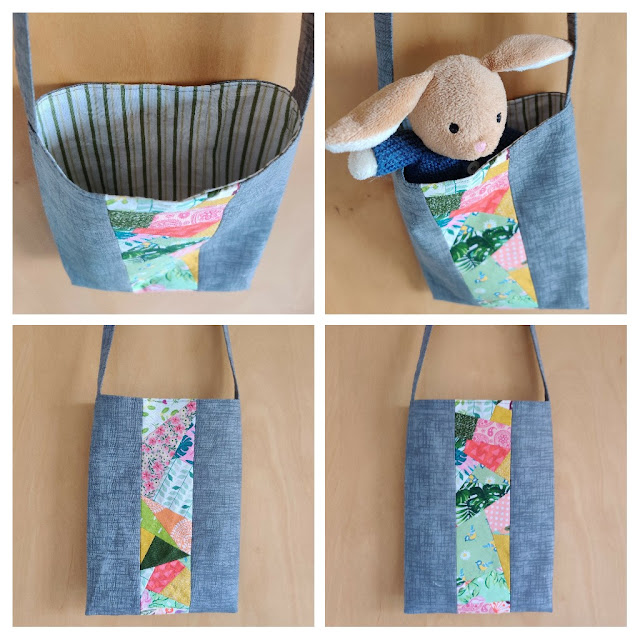 ...messages from the Universe

I'm not really a big believer in the whole "messages from the Universe" shtick, so perhaps this post should have been titled 'Serendipitous Moments' instead. Suffice it to say that we went for a walk yesterday (new to us, recommended by family) that delivered a couple of those happy little happenstances.
The Easter Sunday weather was glorious - very sunny but with that crisp, early Spring chilliness in the air (in other words, perfect weather for walking). The route took us along a narrow strip of land between the river and the canal. The picture below gives a completely false impression - it looks just like an idyllic country lane doesn't it? As long as you looked straight ahead, it really could have been - complete with cheerful birdsong and rippling river noises in the background. In reality if you looked right (across the canal), or left (across the river), there were long, intermittent stretches of fenced off industrial buildings and wasteland visible throught the trees on both sides. It reminded me a bit of a documentary I saw about Chernobyl - in a 'nature prevailing in the face of man-made destruction' kind of way. The other thing missing from this photo is the constant stream of joggers and cyclists coming at us from both directions - it's quite miraculous that there isn't at least one other person in view here! 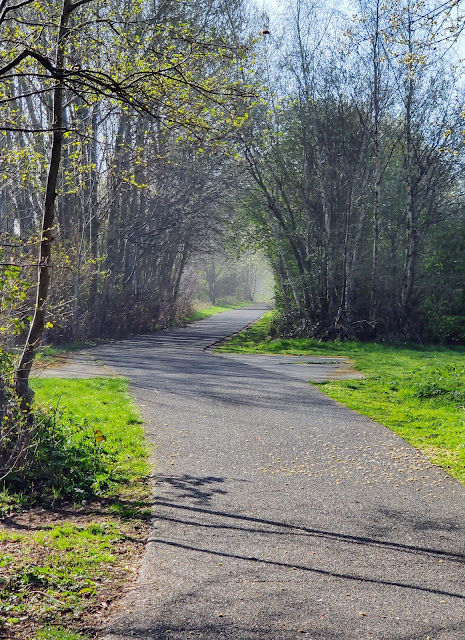 Moment 1: I have lived for nearly six decades and can honestly say that in all that time I have never encountered (or perhaps, more accurately, noticed) the amazing pom-pom loveliness that is Goat Willow blossom in Spring. There were dozens and dozens of these trees along the route and I must have stopped to take a photo at nearly every one of them. So delicate, so unusual, so beautiful! I don't know how I've reached such a ripe old age without knowing that those familiar silver-grey-velvet 'cat's paw' buds transform into such flamboyant flowers. 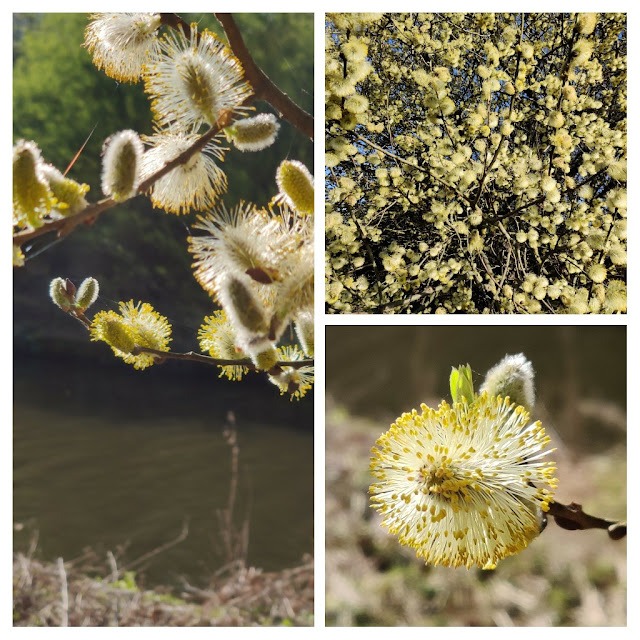 There were plenty of the more traditional blossoming trees doing their best 'sunshine through petals and new leaves' to entice me, but the Goat Willow absolutely stole the show. Once seen, never forgotten. 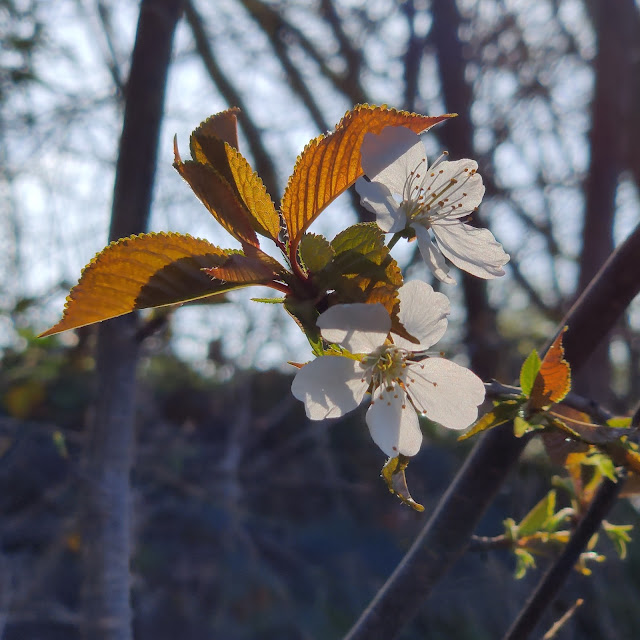 Moment 2: About two thirds of the way into the walk the path crossed under the motorway, the massive bridge creating a soaring roof space below, like an open air secular cathedral, flanked by huge graffiti-embellished concrete pillars. 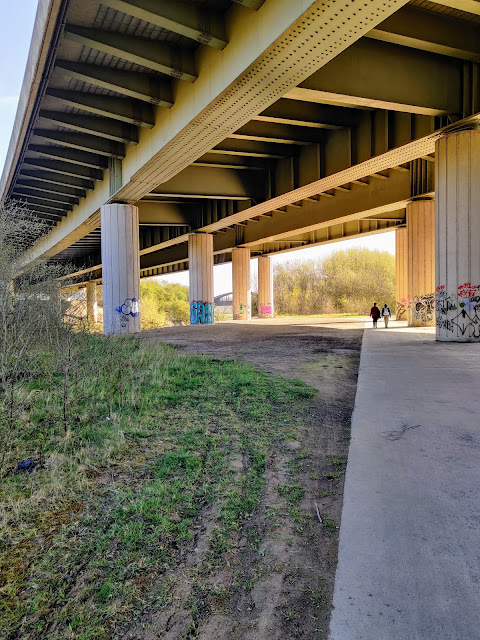 Maybe it was something to do with the quality of light streaming in, the sunshine giving the cool grey columns a soft peachy glow, but I thought it was absolutely beautiful...and then we spotted the little mosaic below, which someone had cemented onto one of the pillars, and it just seemed like such a perfect message for such a perfect day. 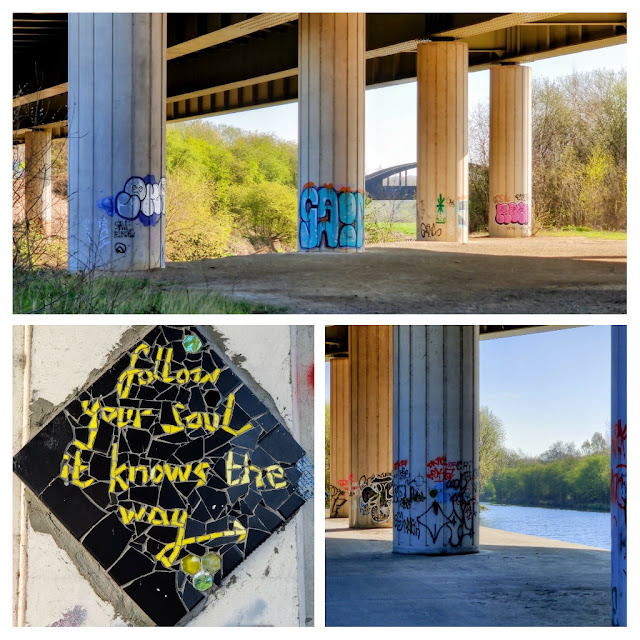 The end of March marks the fourth anniversary of this blog, started as a way of tracking my creative endeavours. Although there are always a few things that get made and given away before I have time (remember) to take a photo, I still feel a sense of achievement when I look back over what I've done in the past year: mask-making (literally hundreds), knitting (hats, scarves, mitts, a jumper and a baby blanket), needle-felting (brooches and a Snork-maiden), doll-making, doll's-house furnishing, fabric-painting (lavender sachets and #the100dayproject), sewing (6 tops, 2 mastectomy cushions, a brooch and a rope bag), pebble-painting, and underpinning it all, loads of photography. Not bad for a spare-time dabbler!
The end of March 2021 also marks a new milestone/beginning for me. I'm now retired (at least temporarily, to see how it goes) and will hopefully have a lot more time for making (along with all the other things that used to get squished into weekends and annual leave). I'm hoping that this time next year I might have found a focus - that there might be something that bubbles to the top of the idea soup in my brain and gives me a real sense of direction - but then again, maybe I'll just continue enjoying all of the things and dabble on a full-time basis! Watch this space... 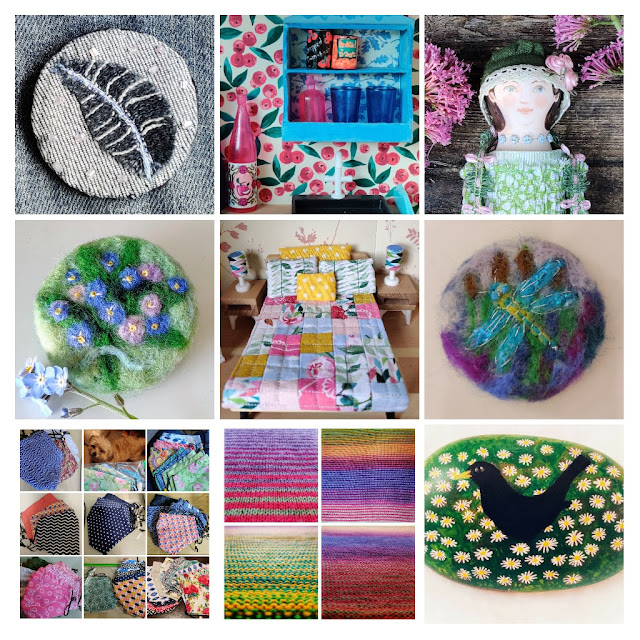 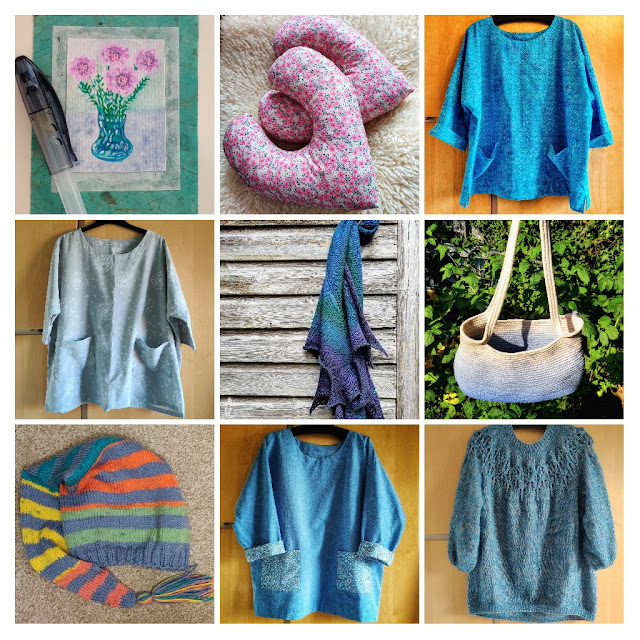 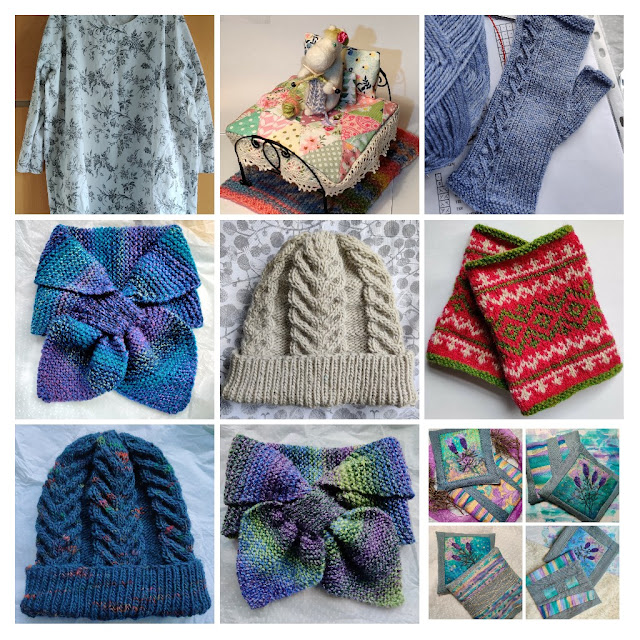 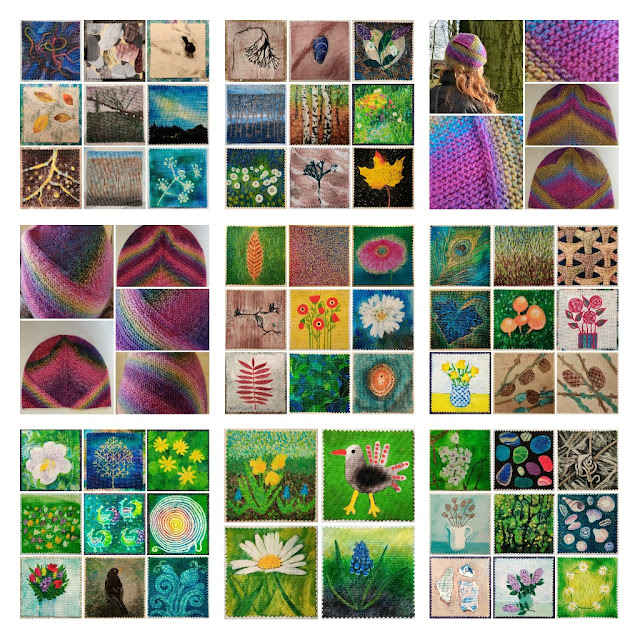