It's been just over seven weeks since my early retirement started, and I'm still trying to get used to being my own boss. As much as I used to grumble about my old job, at least I knew what I was supposed to be doing for 7.5 hours per day, whereas now I find myself in the (incredibly fortunate, I know) position of being able to (mostly) please myself. I'm still taking and/or picking up my husband from work (he used to cycle the 10 mile round trip every day, but after being knocked for six by Covid in December he's having to take things steady to rebuild his stamina), and I walk the XXSCat dog with my daughter during her lunch-break, but the rest of the day is basically my own. So I've been making lots of to-do lists, and telling myself I have to do something really constructive every day, and then feeling horribly guilty if I don't. My friend, who early-retired a couple of months before me, tells me that she's "loving life", and wakes up every day feeling like it's Christmas morning, but I'm not quite there yet! I don't regret my decision, and I certainly don't miss the stress of work - I just need to figure out a routine that works for me.
So the past week has been an eclectic mix of activities. Cleaning, gardening in the occasional gaps in the rain storms, taking the car for its MOT, getting a blood-test and discovering that I'm Vitamin D deficient after a year of lockdowns, and indulging my creative impulses in between: 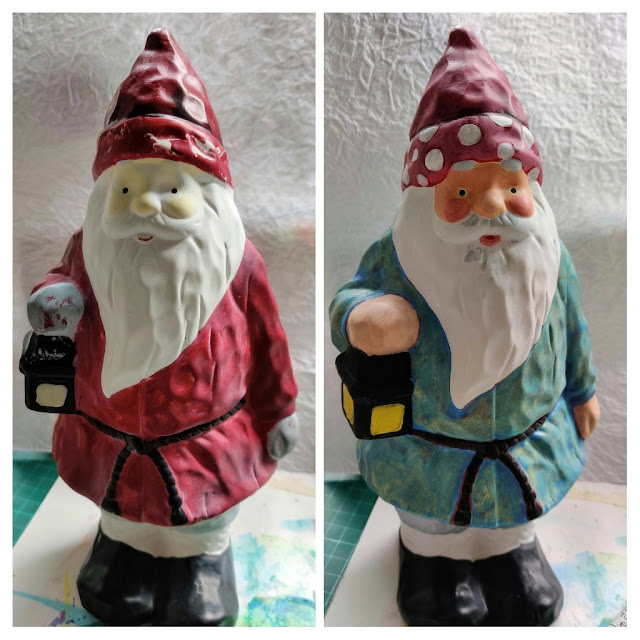 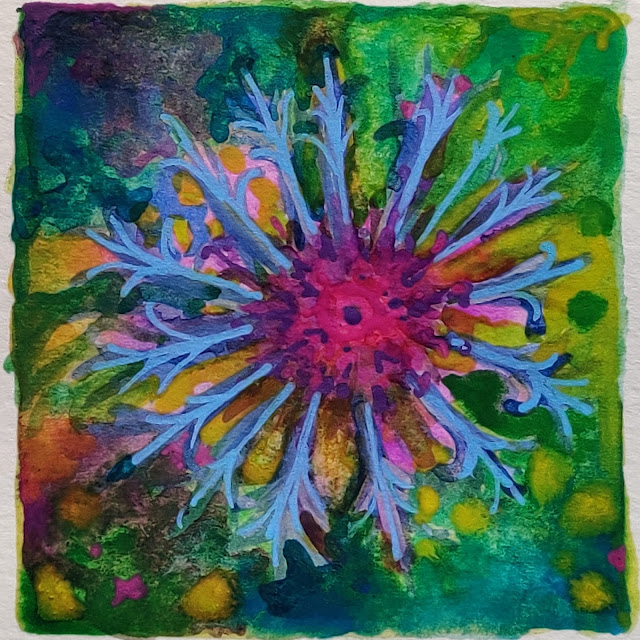 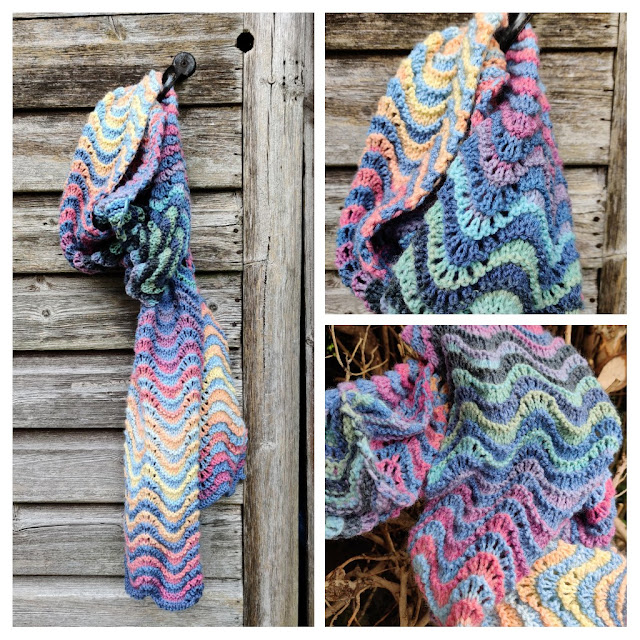 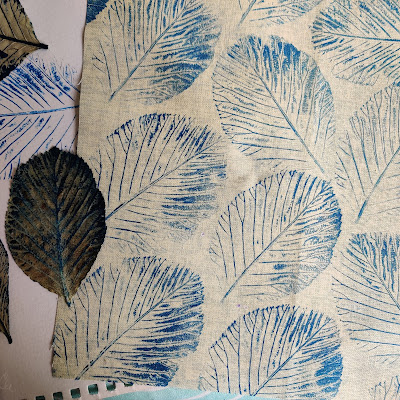 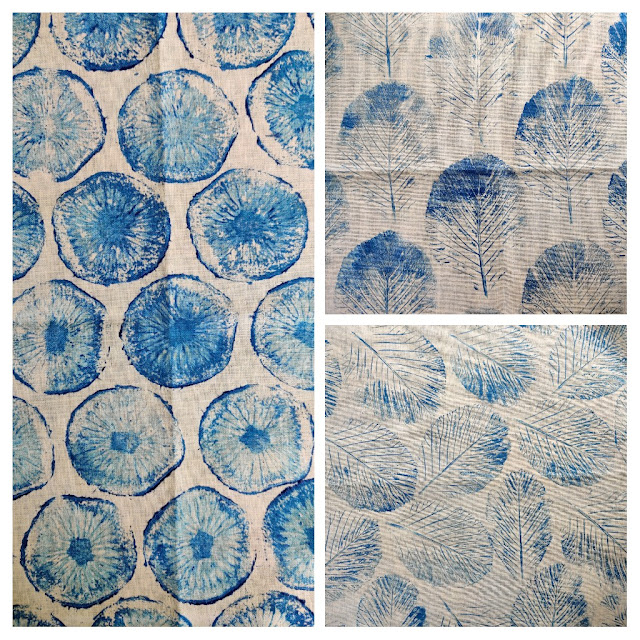 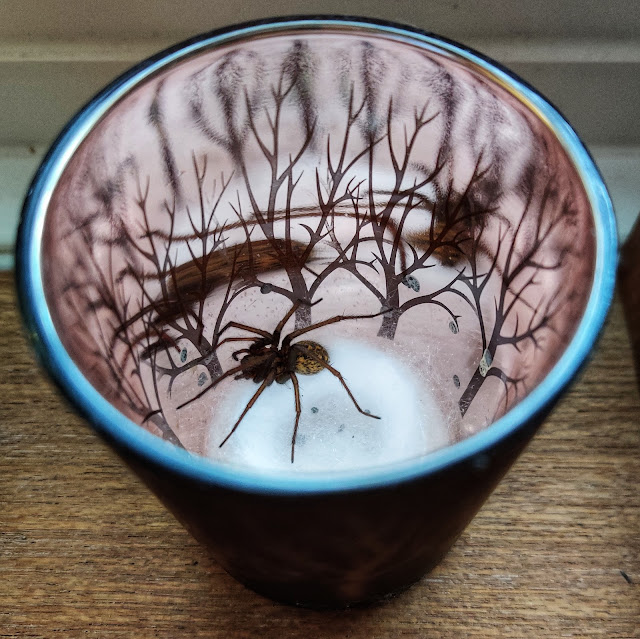 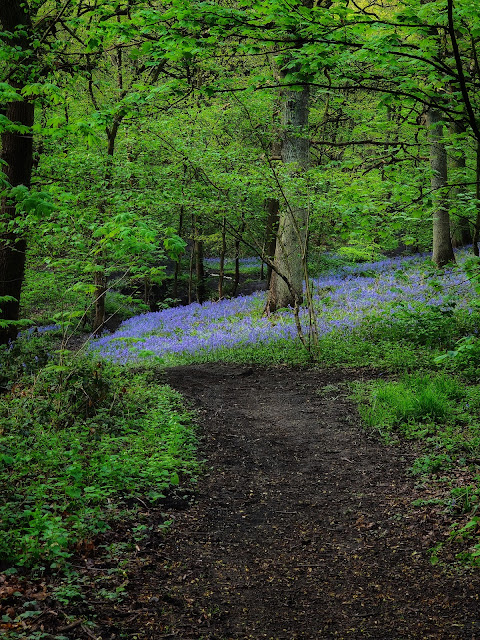 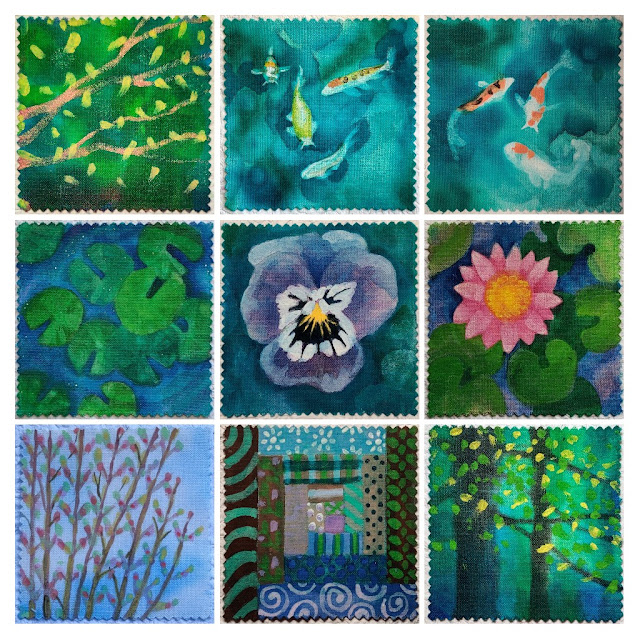 ...and one final square (below, top right) completes the project. I ended with a clematis painting because I'd started with one. From bare, knotted stems in January to a mass of flowers in May! 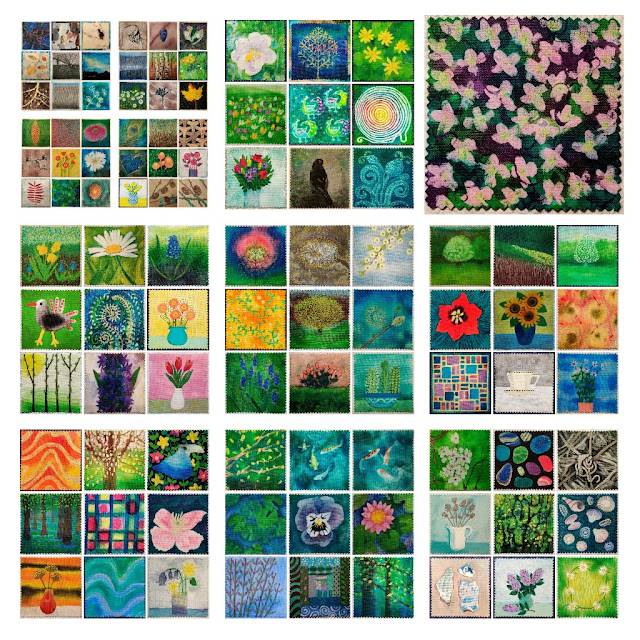 Looking back on the project, the paintings I'm fondest of tend to be the ones that were done from visual impressions/memories, rather than relying on photos for source material: 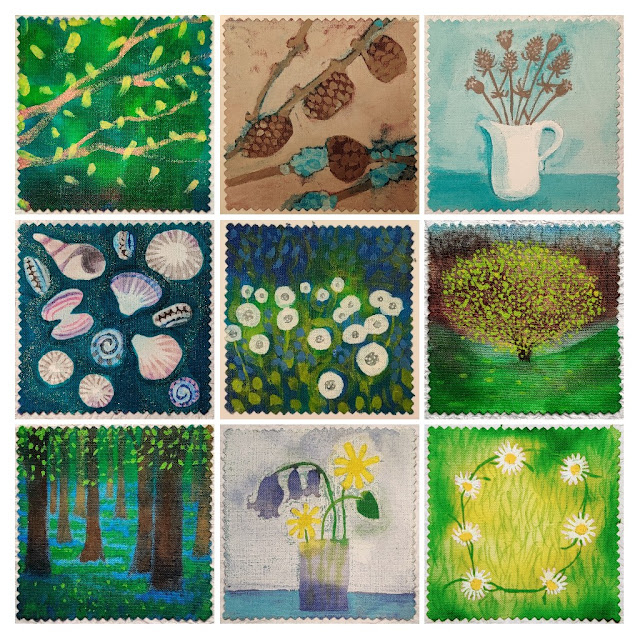 The fabric paints I used are from the Pebeo Setacolor range*. They come in gorgeous colours, and several consistencies, which give different effects depending on how much you dilute them and the type of fabric they're intended to be used on. So, moving from left to right in the photo below: 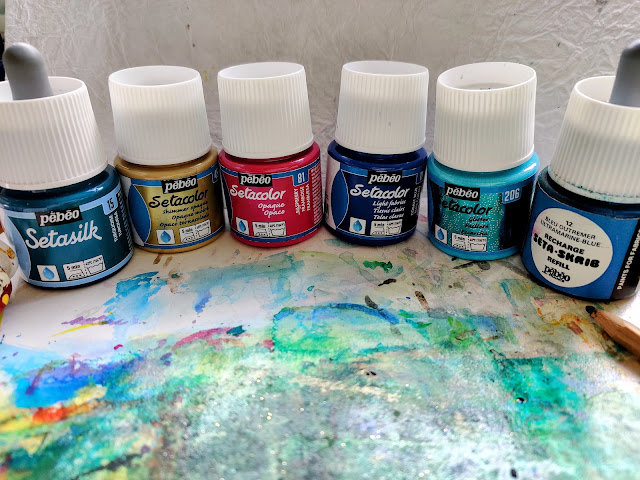 *Other fabric paints are available, I just decided to stick with Pebeo as I liked the Seta-Skrib coIours I already had in my stash!
Posted by Little Dorrit does... at 05:44 6 comments:

...all the small things

I was doing the rounds of some of my favourite blogs on Sunday morning, when I came across Ann Wood's latest tutorial for a miniature wood stove - made out of cardboard (loo roll tube and an egg box) and other crafty bits and pieces - and fell head over heels in love. It shot straight to the top of my "To do" list like a rocket and everything else (breakfast, laundry, conversing with family, etc.) paled into insignificance. I had to set to work immediately and make one of my own!
As luck would have it, I'd put an egg box in the recycling bin a day or two before, so I didn't even have to turf any eggs out to get my hands on one. Ann's tutorials are always clear and easy to follow, so after a couple of hours (and a few silly mistakes, like accidentally cutting up the piece set aside for the legs and having to cobble it back together using spare parts) I ended up with this: 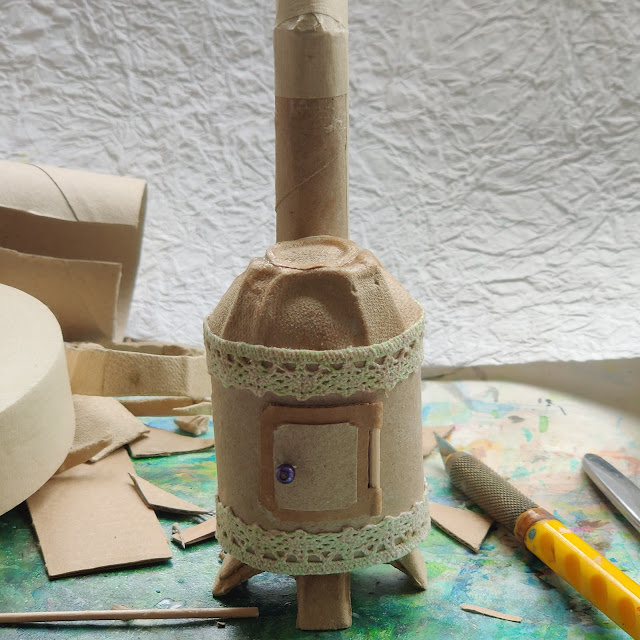 Ann's instructions were to let the glue dry thoroughly before painting - "Or you will be sad!" So I decided to make a little Dutch Oven style pot to sit on top of the finished stove. I was in the Making Zone by this point, so I reached for the moulded inlay from a chocolate box I'd saved "just in case", cut off one of the pot-shaped pieces, sprayed the outside with the speckled grey stone-effect spray-paint I'd bought from Aldi "just in case", added a little garden-wire handle with a painted masking tape grip, and filled it with some hearty baked beans (air-drying clay, painted and gloss varnished in situ). A (cocktail stick) wooden spoon to stir them with was the finishing touch. 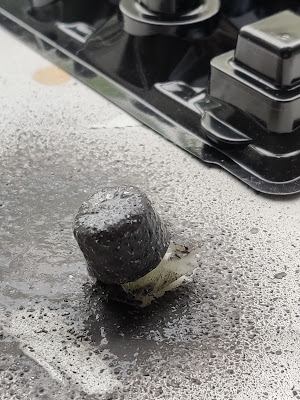 This is the finished stove - painted with a couple of coats of acrylic paint (Payne's Grey), highlights picked out with a soft 4B pencil. It is simply too cute for words, and every home should have one. 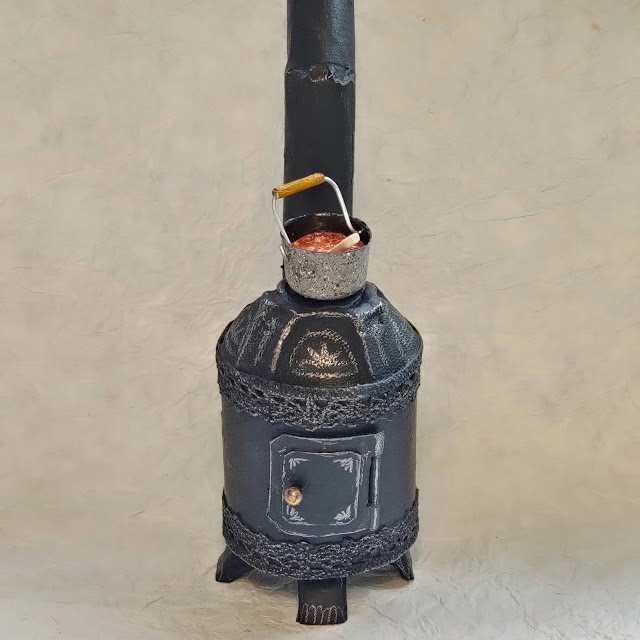 I've had a lovely time over the past week knitting and stitching tiny clothes for a friend's very-much-longed-for miracle baby (a girl), due in early June. We are having a 'virtual' shower for her over Zoom later this week, and they needed to be ready for collection and delivery by the shower organiser tomorrow, so that they can be 'quarantined' for a few days before opening. The little cardigan is "Ode to Doris", the blanket (background bottom right) is "Camilla", and the pretty little bloomers are from this Wiksten pattern. I really struggled with lighting when taking the photos - the top left one is probably the most accurate colourwise. 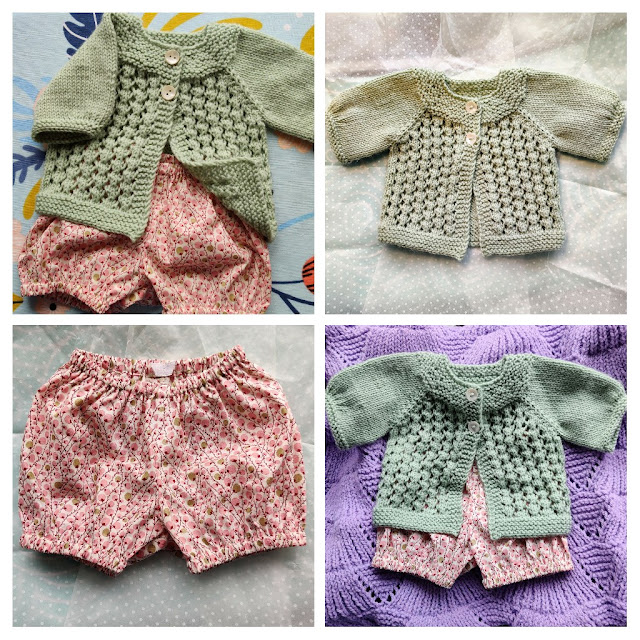 This was my first "Ode to Doris" cardigan, but probably won't be my last, as it came together so easily - top down and seam free - perfect for anyone who hates seaming or picking up stitches as much as I do! "Camilla" is my go-to baby blanket pattern (this is the fourth one I've made). It knits up fairly quickly in aran-weight yarn, and makes a lovely, squishy, practical blanket for everyday baby-snuggling. The bloomers will definitely be part of my 'new baby' gift repertoire from now on - the first size can be cut from a fat quarter with room to spare, they take a couple of hours to construct - two pieces, three seams and three hems, with a bit of elastic threading along the way - and they are almost too adorable to bear! They can be made in two lengths and 6 sizes (birth to 3 yrs), so are very adaptable.
It's been a bit of a slog, but I've managed to keep up the 2.5" squares for the #100dayproject every day too. At the time of writing there are 8 more days to go to get to the finish line. I'm really proud of myself for seeing it through, but looking forward to breaking free from the self-imposed tyranny of working within such tight parameters! 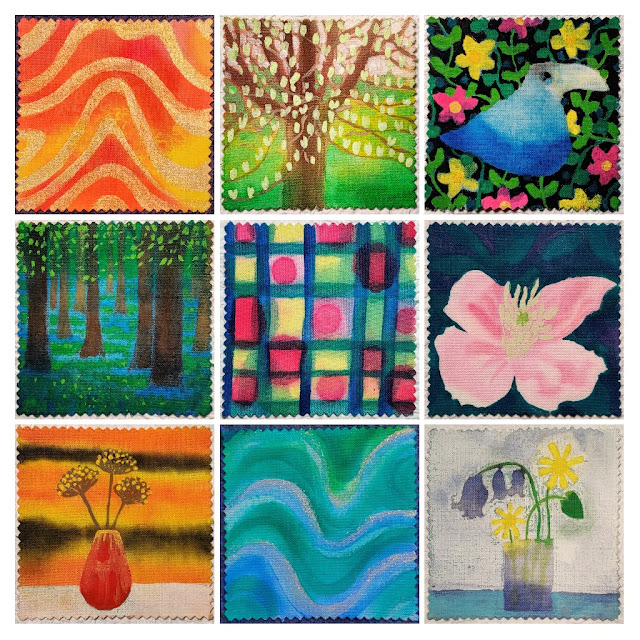