...picking up the pace 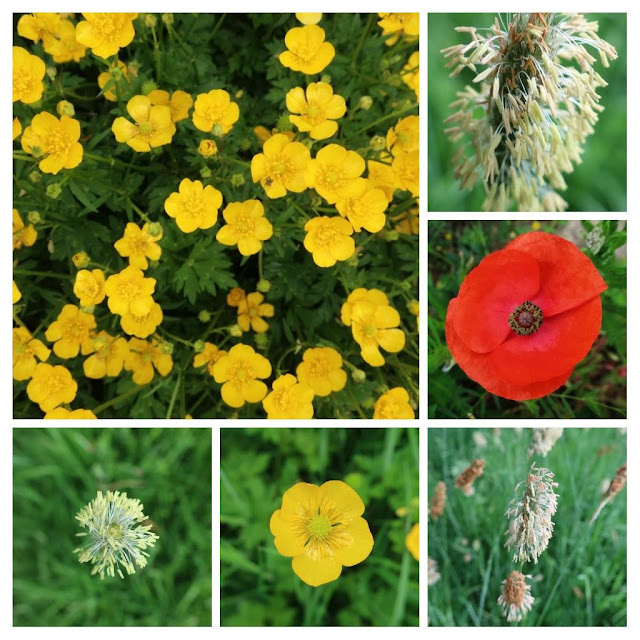 Everything seems to have shifted up a gear in the past week. At the park crowds of golden buttercups are turning their cheery yellow faces skywards, and scarlet poppies glow against the lush green grass. The air is thick with pollen, making my eyes water and my nostrils twitch...but the rhododendrons are so heavenly pretty it's worth getting up close, despite the inevitable sneezing that follows. 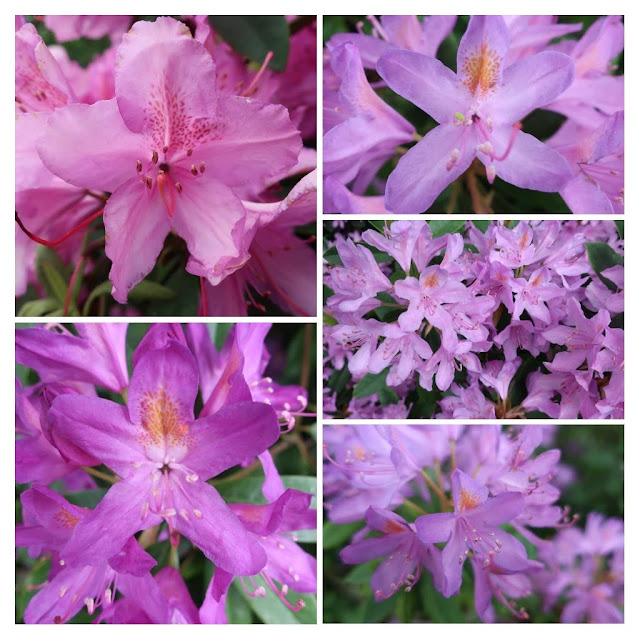 We dropped the car off at the garage in Wakefield for an oil service, and wandered round the corner to the Hepworth gallery. I admired the Serena Korda installation of dreamy floating ceramic mushrooms and failed to get any decent pictures of the Hepworth and Nicholson paintings on show. They inspired me nevertheless, with their rhythmic geometric shapes, earthy tones and contrasting areas of texture and flat colour. My fingers positively itched to pick up a paintbrush again. 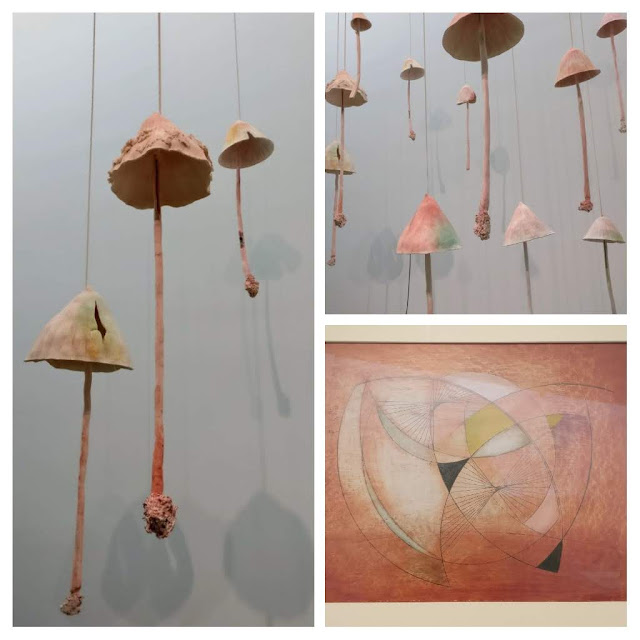 A scone and a cup of coffee in the gallery cafe and then back to the garage to pick up the car, where they kept us waiting for another half an hour. Just long enough to justify me taking five copies of their rather lavish in-house magazine with me when I left. Those lovely bold rainbow squares printed on the matte heavy-weight paper front and back covers - so many possible uses for the creative crafter, and such a waste to have stacks of them sitting around in a car showroom! 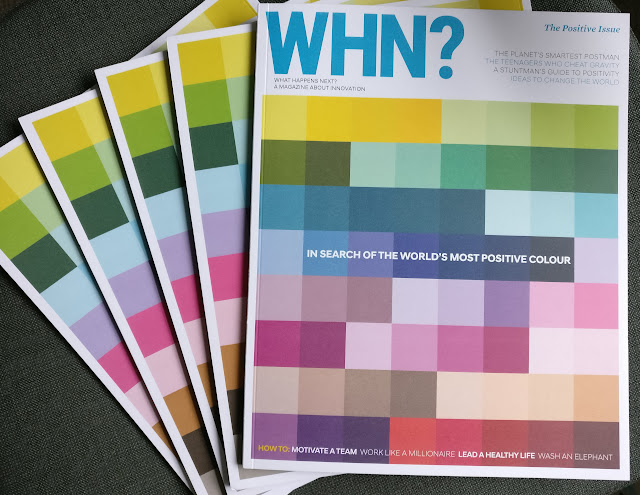 I've been tackling the overgrown grass in the front garden now that the forget-me-nots are going to seed. We don't own a lawn-mower (it's too small to be classed as a lawn anyway) and the strimmer just mangles it when it's overlong and damp, so I'm using shears and doing a few square feet at a time. It sounds ridiculously labour-intensive, but it doesn't take long and is actually the best way to avoid detonating the disgusting landmines left by the neighbourhood cats. I'd nearly finished the job this morning - just one little corner left - when I encountered a rather flustered toad in the damp, shady undergrowth near the bushes, and decided to leave him in peace. I love the fact that my untidy jungle of a garden in inner-city Leeds makes such a good habitat for wild creatures - hedgehogs, butterflies, toads and bees. Time to relax and smell the roses instead. Aren't they beauties? 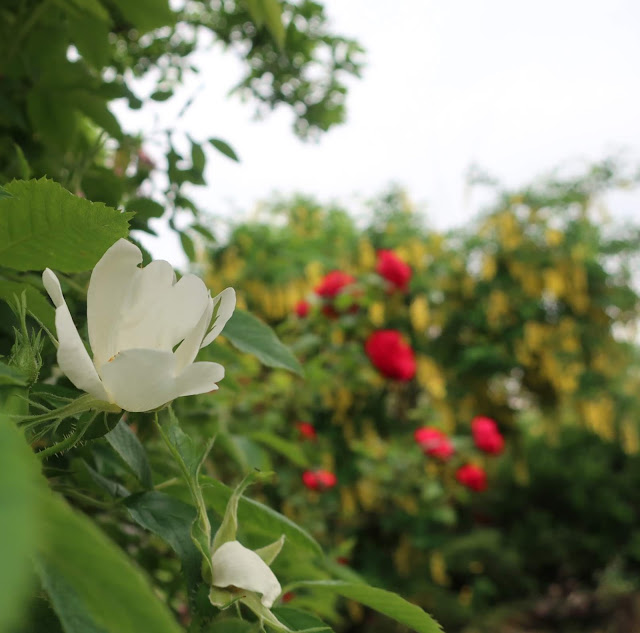 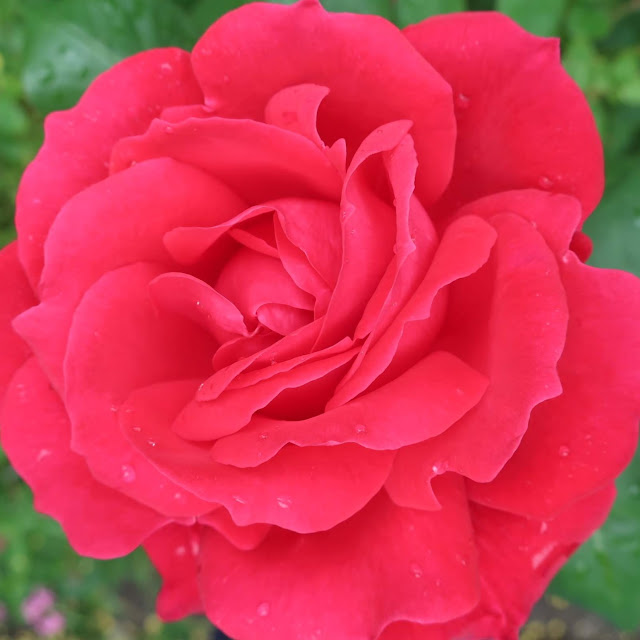 I've abandoned the cardigan I started - the bargain-basement yarn just wasn't right for the pattern (too thick) - so it's destined to be frogged and made into a baby blanket or a scarf (or both). It's a lovely colour, so certainly won't be wasted. Instead I'm embarking on this pattern - 'Gable' by Hannah Fettig - just as soon as the correct-sized interchangeable needles arrive in the post tomorrow. Can't believe I don't already own 3.75mm needles for my circular cables, but it's apparently true. I'm ever so slightly disappointed with the yarn I ordered. It appeared more a pale whitish-lilac shade on the website, and is distinctly grey in real life - but light grey with lilac tones still works for me and it will probably be a lot more practical, go with more things etc. I certainly don't dislike it enough to go to the bother of returning it! 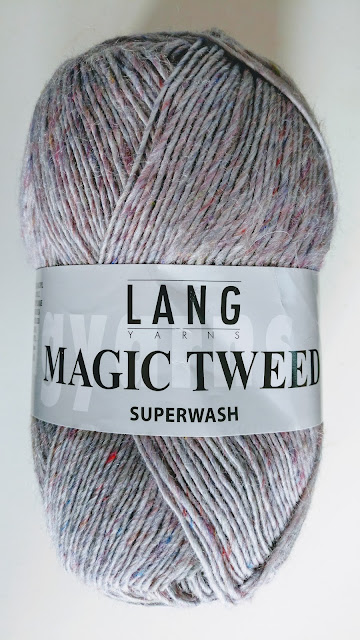 My attempts to improve my physical health are very gradually beginning to pay off. I'm still in a fair bit of pain and discomfort but I'm making the effort to move more (even if it hurts) and have lost around 6-7 lbs in weight so far. At my last appointment the physiotherapist noted a definite improvement in the range of movement in my hips, which gives me hope that I won't be a Tin Woman forever. Follow the yellow brick road!

...the circle of life

Towards the end of June last year we had a minor wildlife invasion at work - dozens of these rather lovely magpie moths emerged from their cocoons on the wall outside the back door and fluttered clumsily in and out of the office for a couple of days. 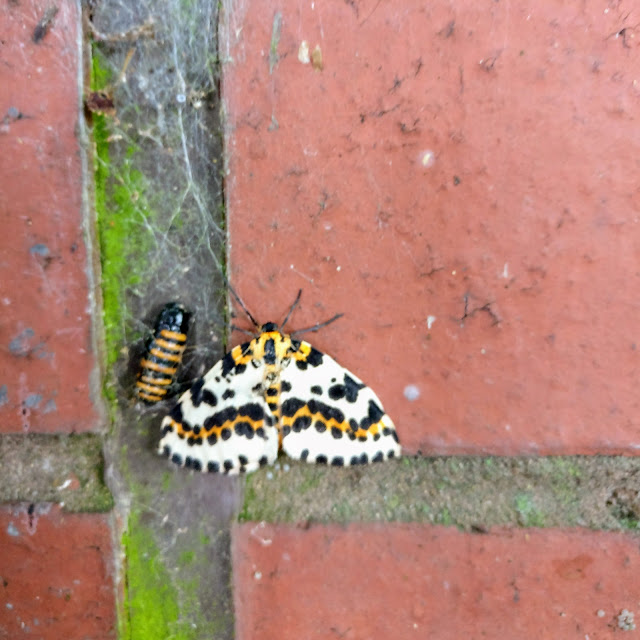 This week I noticed several strikingly marked caterpillars inching their way up the same stretch of wall. A quick Google check confirmed that they are indeed magpie moth caterpillars, presumably returning to a tried and tested spot to begin their metamorphosis. I'm curious as to why they choose this rather exposed location, which leaves them at the mercy of the local birds, but perhaps they don't taste very nice and can therefore roam with impunity. It's probably easier to get the cocoon to adhere to the rough texture of the masonry too. 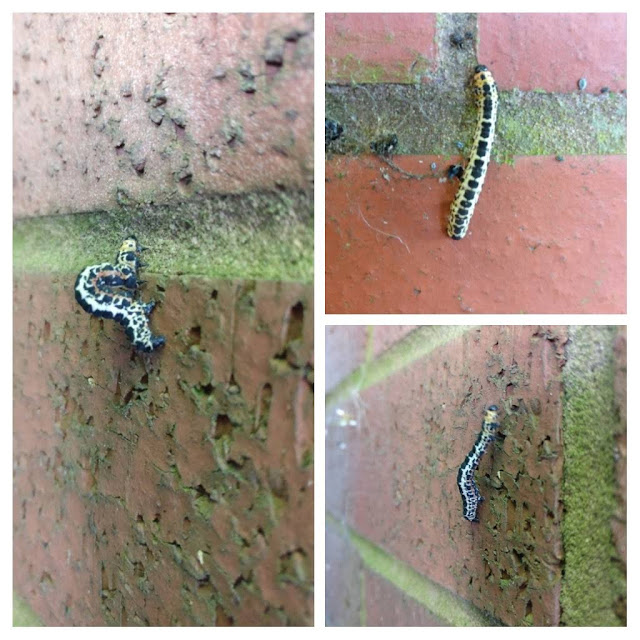 I wonder what will happen when the building is demolished and the magpie moth ancestral home is no longer there? I hope the moths will have flown before the bulldozers move in.
Posted by Little Dorrit does... at 13:08 No comments:

I went out into the front garden last night to get a picture of the cornflowers while they're still in bloom, and ended up wandering around for half an hour photographing all the other lovelies. The front garden is not extensive - it's a pocket handkerchief really - so goodness knows what the neighbours thought I was up to. They were probably hoping I'd come out to tidy, or cut the grass, but they should know by now that the grassy patch is always allowed to run wild until the forget-me-nots fade.

As we no longer have a guinea-pig to eat the dandelions they have been growing completely unchecked this year. I had a moment a couple of weeks ago where I considered picking all the flower-heads before they could turn into multi-directional seed dispensers, but decided it would be easier to mentally reframe them as jolly yellow flowers - not weeds - and surrender quietly to their relentless quest for world domination. Besides, those ethereal seed globes really are very beautiful. 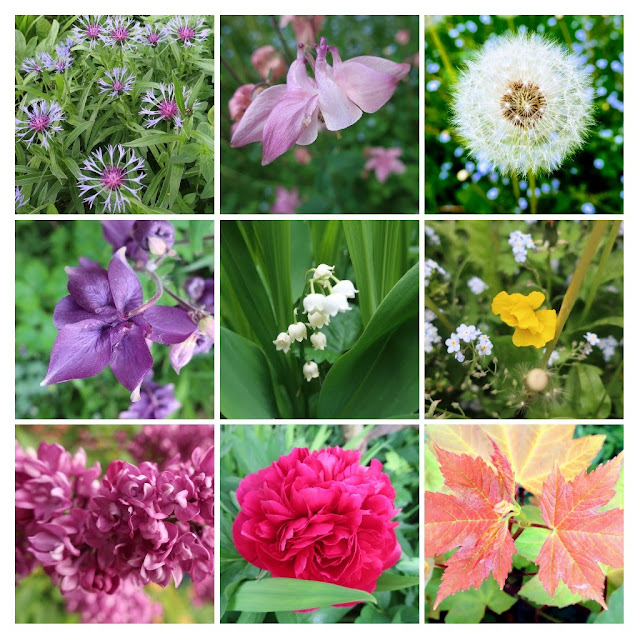 If I hadn't taken time out to smell the lilac and the lily-of-the-valley (my favourite scented flowers) I might not have noticed the little colony of yellow poppies in the corner, or the new red leaves unfolding on the sycamore bush (it wants to be a tree but must be kept to shrub height for fear of root damage to the foundations). I also wouldn't have fully appreciated the diverse colours and shapes of the columbines - so many delicate shades of pink and purple, and so many intricate designs. If I were a bee I'd certainly be mesmerised! 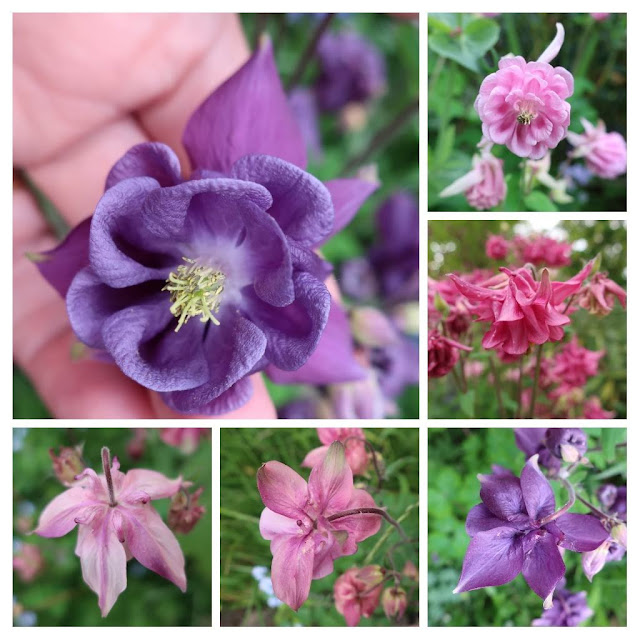 This picture is just heart-stoppingly pretty isn't it? 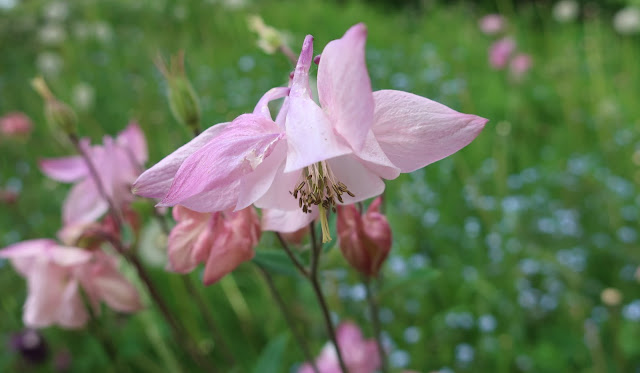 In the back garden this year's big success story is the violet. Whenever I'm weeding (once in a very blue moon) and find a little clump of heart shaped leaves I'm always careful to leave it in situ. Gradually, gradually they have spread, until now they are everywhere - popping up in plant pots, between paving stones, under the strawberries, among the grass. Come to think of it, the brash dandelion might meet with a warmer reception if it copied the shrinking violet's softly, softly approach to colonisation! 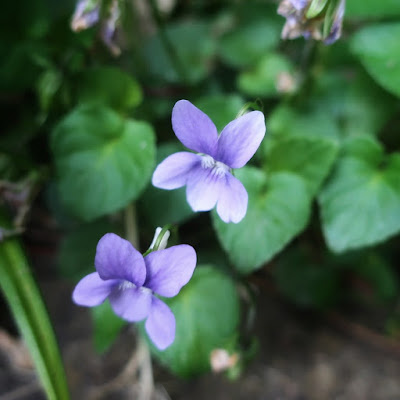 There are peonies in both the front and the back garden (I inadvertently dug up some tubers one year so transplanted them in hopes they'd grow, and sure enough they did). These flowers are just incredible. The camera doesn't really know how to cope with the intensity of those ruby petals. They literally glow! 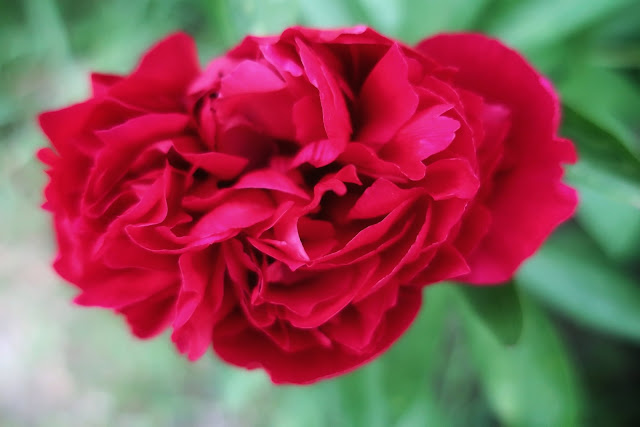 Finally, who can resist the clematis in full-on Kardashian mode, flowering extravagantly to the point of vulgarity? It clearly never got the 'less is more' memo and just goes for over-the-top glamour every time. A bee could die of exhaustion trying to service these attention-seeking blossoms. 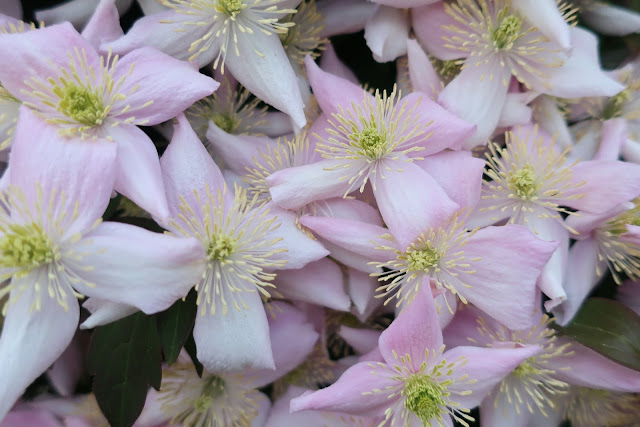 This morning's walk. Everything lush and green, dewdrops sparkling in the long grass, and buttercups turning their golden faces to the sun. 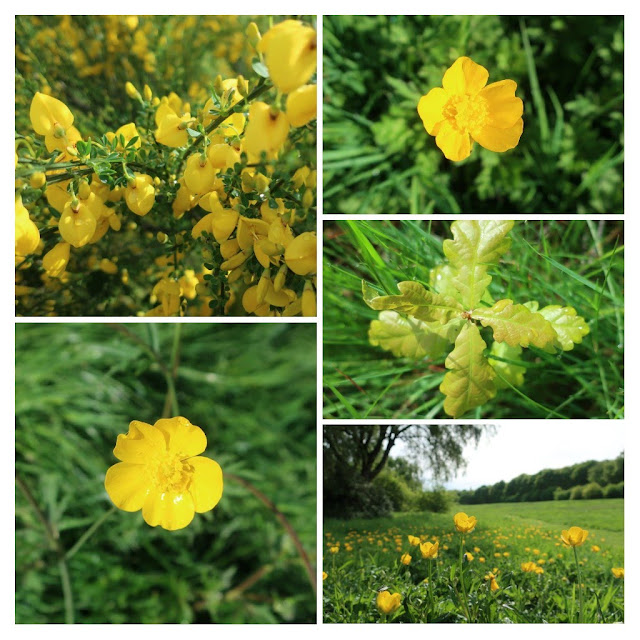 A great day for drying washing on the line, leaving the door open for the XXSCat dog to run in and out at will. She is locked in mortal combat with several of the neighbourhood cats, who are mostly bigger than her (what with her being an XXSCat dog and them being Medium or even Large Cats).They sit glaring at her through the chicken wire under the hedge, occasionally making a dash round the back of the garage, sending her sprinting down the garden to intercept them. When she's not patrolling the perimeter she's rather partial to basking in the sunshine on the warm metal drain cover by the back door. 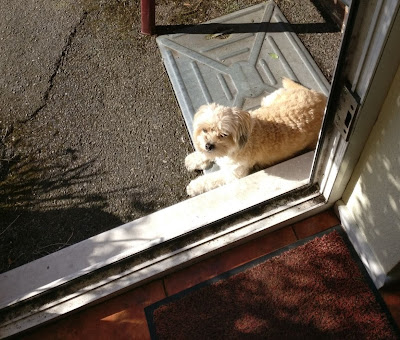 I finished the picture for the friend of my friend's Civil Partnership card today. It's a little rough around the edges (my eyesight isn't what it used to be and my fingers aren't as nimble) but I think it came together quite well and has a bit of a jolly Beryl Cook vibe about it. The person who commissioned it is pleased, so that's the main thing. My favourite part of it is the pretty little musical notes floating out on the breeze - they add a touch of whimsy to the happy scene. 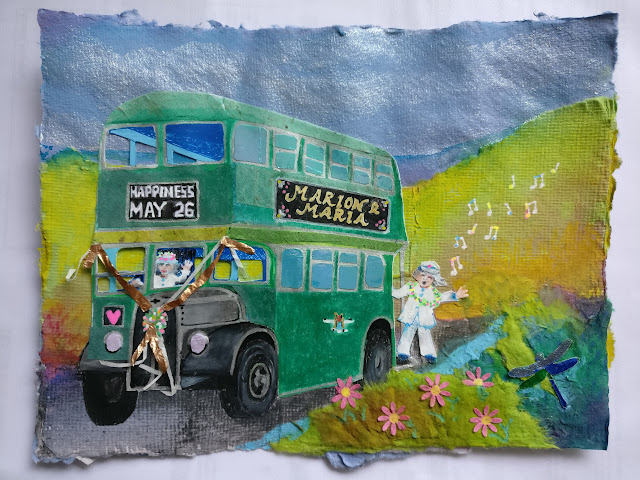 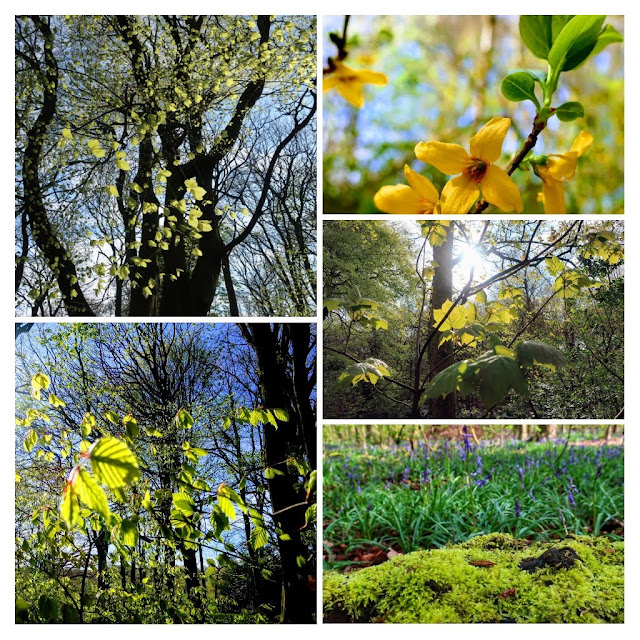 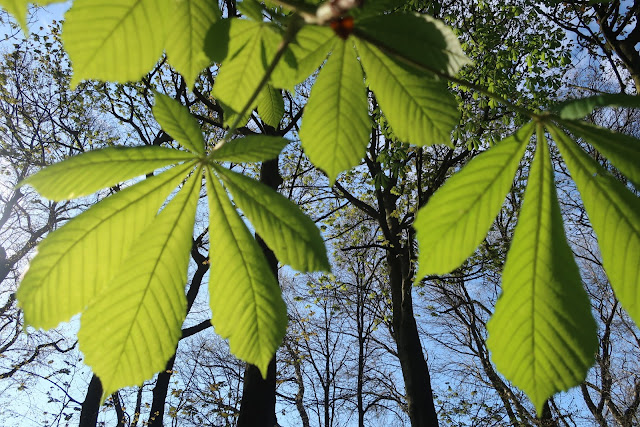 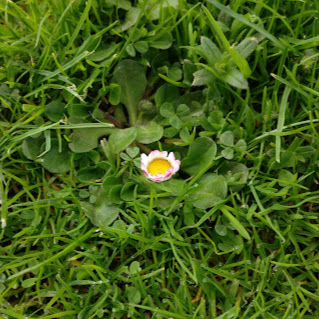 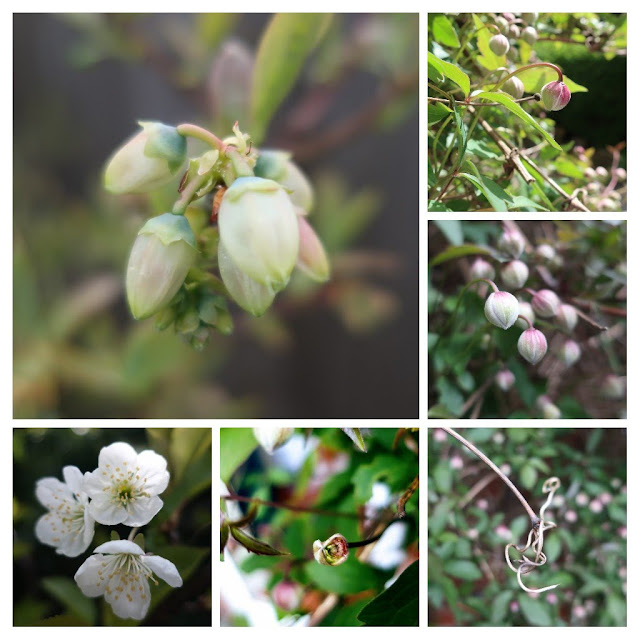 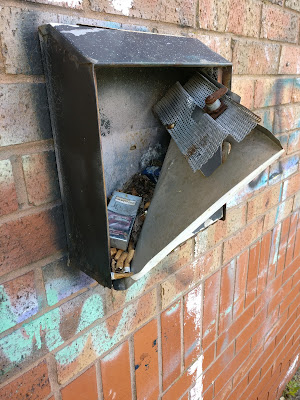 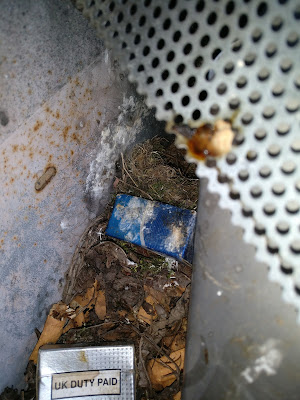 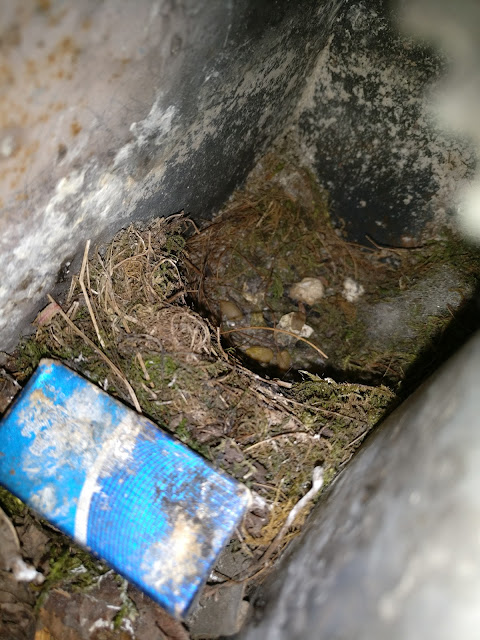 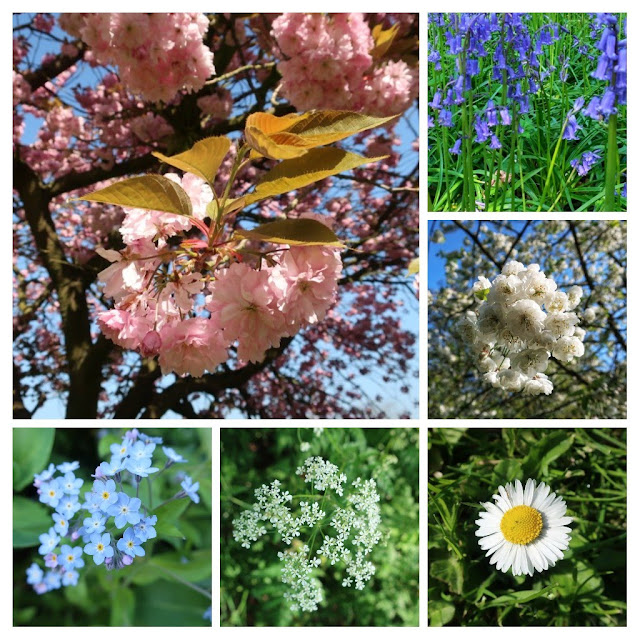 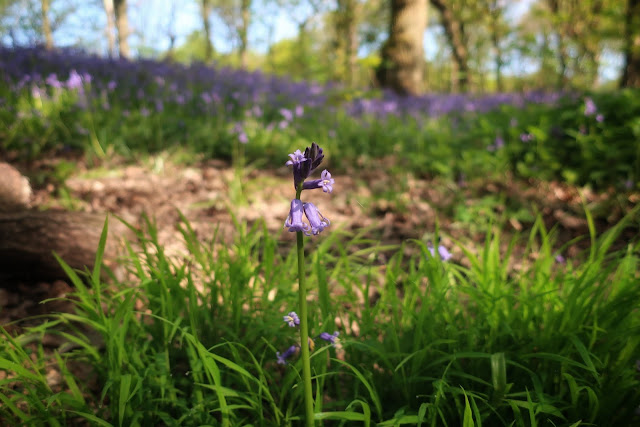 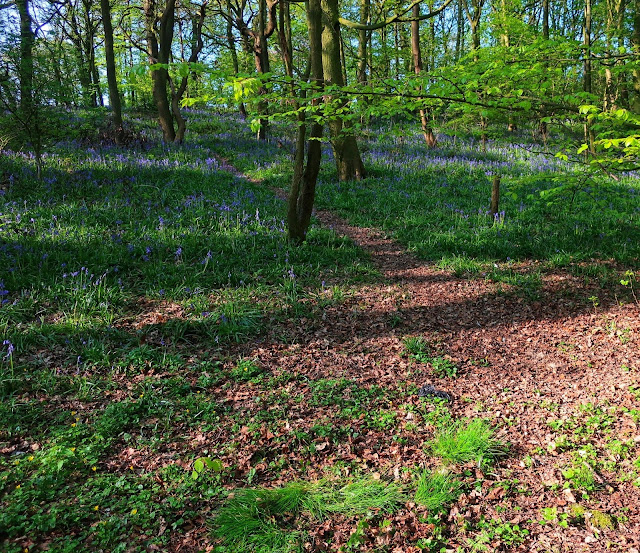 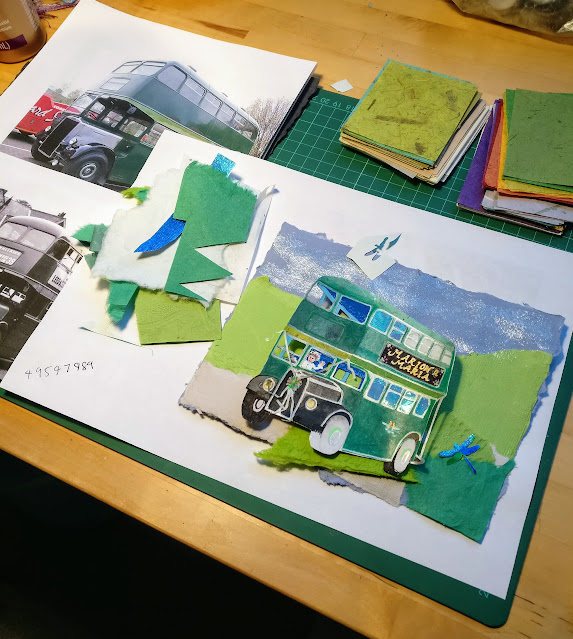 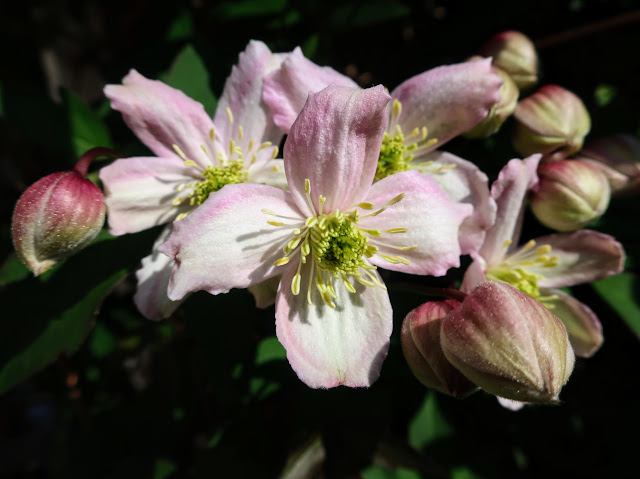