Now that the nights are getting longer the sun has been coming up just as we're starting our working day. One morning last week there was a deep coral-peach sunrise, which lit up the factory chimney behind next door's garden wall, like a rose-tinged Lowry painting minus the bustling throng of matchstick figures. I hurried downstairs as quickly as my stiff morning joints would allow, grabbed my cameraphone and raced back up to get a picture from the back bedroom window. I still missed the best of it, and couldn't zoom in as close as I wanted to either, but managed to capture the final fading moments before daylight arrived. 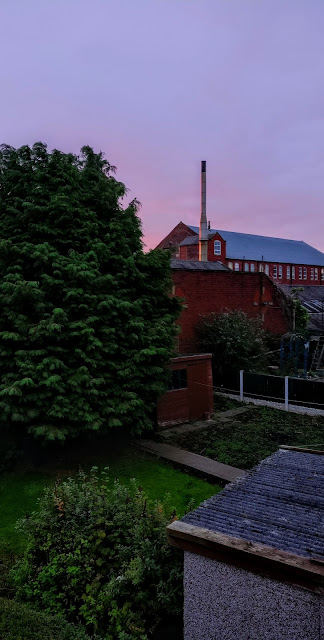 I hate the lack of light in winter - travelling to and from work in darkness and being stuck indoors all day really gets me down. Weekends are never long enough at the best of times - when daylight is in such short supply it adds insult to injury how little time I have to be out in it. I wouldn't go so far as to say it's Seasonal Affective Disorder but I always feel happier once we pass the Winter Solstice and I know the days are getting longer again. So roll on December 21st! In the meantime my one consolation is the gorgeous sunrises and sunsets I'm more frequently witness to. My route to work takes me up a big hill, with quite a panoramic view at the top, and I'm often tempted to pull over to get a photo of the sky before heading indoors for the day. So watch this space...

Last weekend we had a couple of walks at the park, where the leaves are starting to fall and the berries are ripening.. 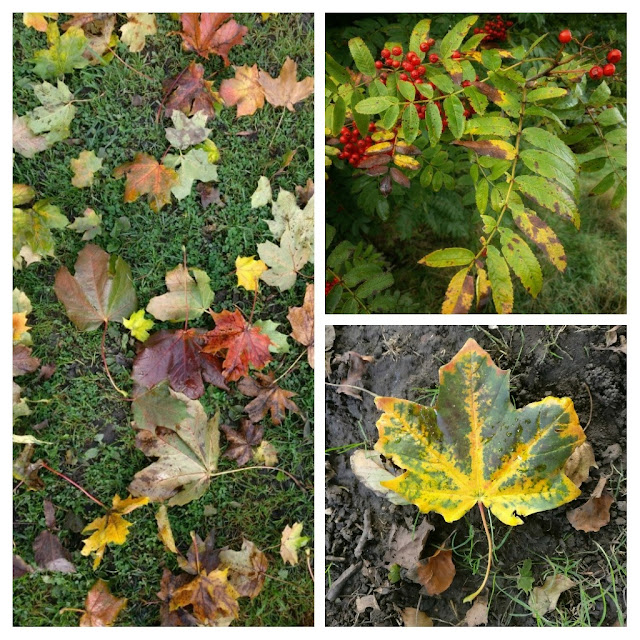 On the second day I found a near-perfect horse chestnut fruit, it's spiny yellow/green flesh gently splitting to reveal the conker perfectly nestled within. 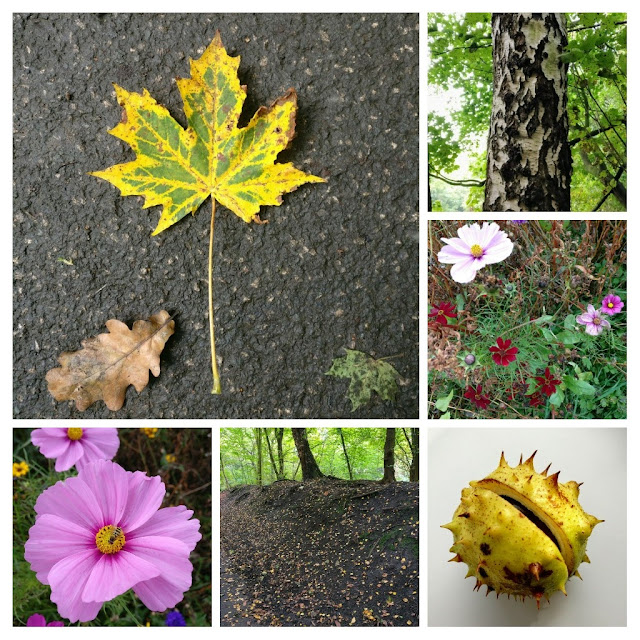 It's rare to find the whole fruit when children are usually so quick to harvest them. Photographed against a white background I think it has a real sculptural presence. 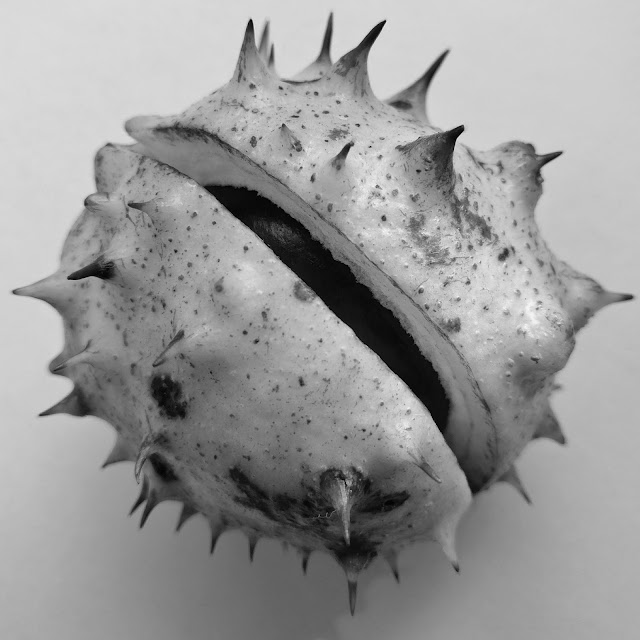 In other prickly news, a few nights ago the XXSCat dog alerted us to the fact that there was something unusual in the back garden, discovered during one of her routine patrols of the perimeter fence. A hedgehog, doing its best to masquerade as an old scrubbing brush, had attracted her attention and was cornered behind some flowerpots near the hedge. We have seen hedgehogs in the garden before, so I'm guessing it's quite a good habitat for them - semi-shaded and sheltered, with lots of slugs, snails, worms and insects to feed on and plenty of overgrown ivy and dead leaves to burrow in. As previously mentioned, I'm not a 'slash and burn' style gardener - I prefer to give nature plenty of free rein.The only problem (from a hedgehog point of view) is that last year we had to fill all the gaps that weren't fenced with chicken wire to stop the XXSCat dog escaping when we first got her, which slightly limits the scope for free range hedgehog foraging. We decided that the safest thing to do for this one was to relocate it at the back of the garden in the undergrowth on the other side of the chicken wire barrier where the XXSCat dog couldn't disturb it further, but where there were hedgehog-sized gaps to permit re-entry if desired. So I had a really brief but very special opportunity to meet a hedgehog up close and personal for a portrait photo. What a dear little face, straight out of Beatrix Potter! 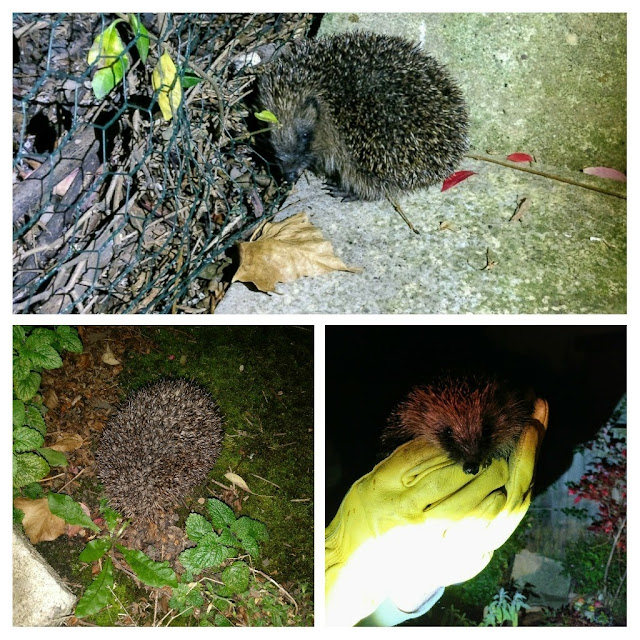 It was my birthday earlier this week. I'm feeling very lucky because I won this beautiful Wivenhoe plate, made by potter Pru Green, in an eBay auction which my lovely husband encouraged me to bid on for my birthday (I normally maintain a strict, self-imposed, £5 limit to keep my magpie impulses under control). I just love it - especially the detail in the flower heads and the pretty blue floral vase (it's like owning two pieces of Pru Green pottery for the price of one). It will be going on the wall in my kitchen where I can see it every single day.


The flowers on the plate look more like daisies, but their floaty petals and intricate centres remind me of the gorgeous lilac coloured flowers I photographed earlier this year and have been ever so slightly obsessed with ever since. I searched the internet and discovered that they are traditional cottage garden plants, called 'Scabiosa caucasica' - commonly known as 'pincushion flowers'.

Another of my birthday presents was a clever little collection of clip-on lenses for my cameraphone. I used the macro lens to take photos of the pincushion flower seed-head I picked (hoping to grow some plants from seed in my own garden next year). They are top and bottom right in the photo-collage below. To the naked eye/standard cameraphone lens the seed-head is just a non-descript beige cluster about the size of my finger tip. But up close, it is quite stunning - intricate, delicate, and tinged with pale green and purple just like the flower it came from. The photos I took are a little blurry - even tiny tremors are magnified and I couldn't hold the camera still enough to get a really pin-sharp picture - but they have a lovely ethereal quality, I think. 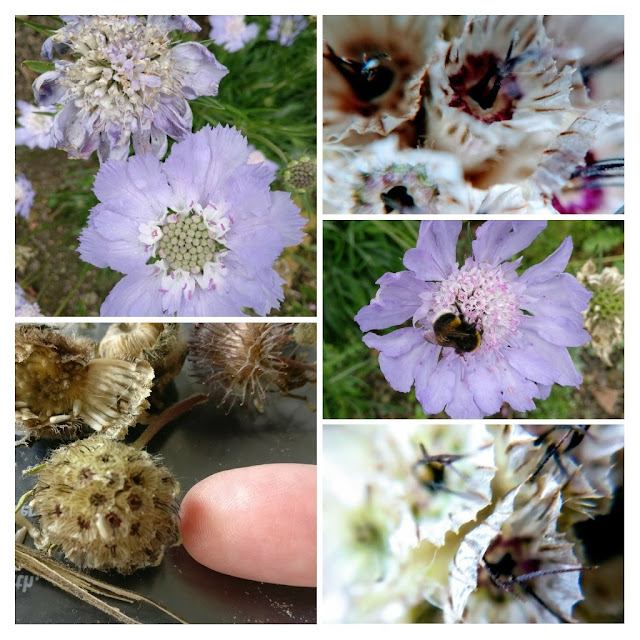 Here are some more: 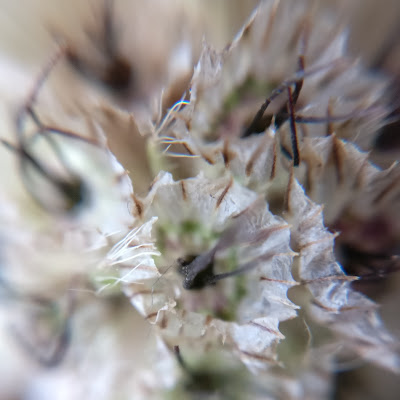 This morning's walk was through the woods that surround the park. It was raining, but we stayed quite dry beneath the branches of the trees while the XXSCat dog tried in vain to keep up with the squirrels. The last leg of the walk took us past the lake, which has patches of very dense duckweed growing around the edges (in the foreground of the picture below). To an inquisitive XXSCat dog the duckweed layer appeared to offer the perfect vantage point from which to inspect the water. I stopped her jumping 'onto' it once, but when I turned around again she had decided to disobey me and was doggy-paddling at the edge of the lake with very startled expression on her face! She is quite a fastidious little XXSCat dog, and would never knowingly choose to jump in a lake. I hope she will eventually forgive me for being helpless with laughter all the way back to the car! 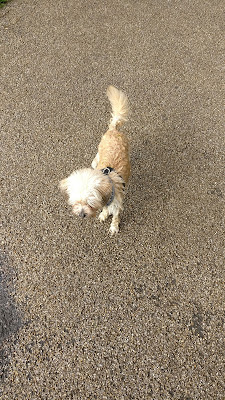 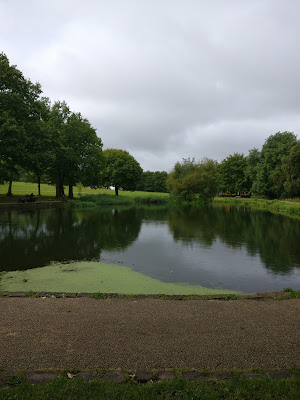 It was a very comical end to a rather nice autumnal stroll, with lots of stops for photos along the way. 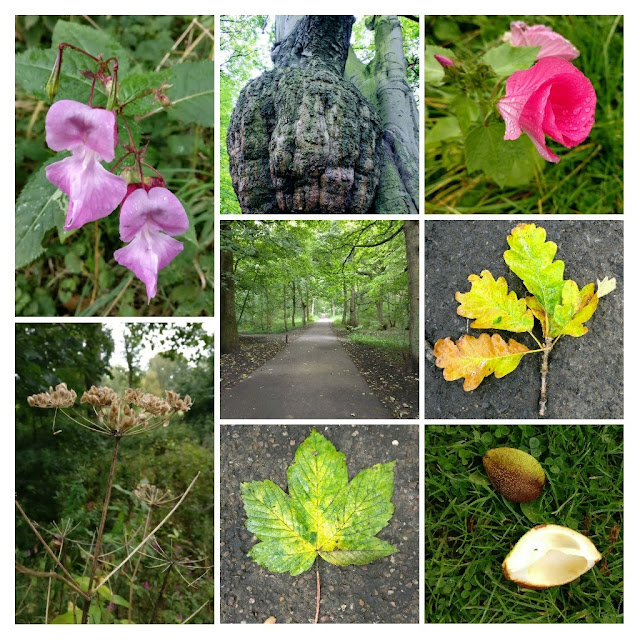 This afternoon I will be doing more sifting and sorting - it is becoming a Herculean endeavour as the weeks progress, but my labours will be worth it in the end.
Posted by Little Dorrit does... at 07:03 No comments:

We went and ordered the carpets last weekend. They will be fitted in three stages over three weekends, starting at the end of October. The gap between ordering and fitting is time we have given ourselves to sift/sort/streamline our belongings, so that the task of emptying rooms for the carpet-fitters will be a little less challenging. I'm glad we're doing it this way (quite gradually). It takes the pressure off and makes it feel less overwhelming. The fact that I'm not missing any of the stuff that's been discarded (so far), and am enjoying the spaces that have been opening up on shelves and in drawers, is making it easier to keep going.

The weekend before last we went through boxes of paperwork - bills, bank statements, and other "important stuff". The stack of "things to file" got filed, the utility bills dating back 10 years and the warranties for electrical goods we no longer possess got shredded and burned along with a whole pile of other out of date documents. Husband reorganised his "man-drawer", untangling a virtual snake's nest of cables and leads with acronyms for names (USB, HDMI, SCART) while I straightened out my sewing drawer. (What stereotypical gender roles we do seem to have - eat your hearts out Theresa and Philip May!) We got rid of the last remaining video-tapes, and had a trip down memory lane with an old mix-tape cassette from the 90s. This survived the cull because we still have a functioning cassette player in the house. You can't beat a bit of Bryan Adams or Alanis Morrisette every now and then.

Last weekend I dug a bit deeper and went through all my old folders from training courses I've been on, and threw away everything except essays, learning journals and a few of the more interesting articles I'd printed off. Then did the same with two big box-files of work-related paper-work, notes, and information accumulated in a former job role. All good stuff, but (let's face it) I haven't referenced it in years. I kept some bits and pieces, but decided that anything really relevant has long since been assimilated into working knowledge and practice and the rest I no longer need. We gave away several board games we haven't played in years and husband bit the bullet and sent a stack of old Xbox games to the charity shop.


Yesterday I went through several folders full of knitting patterns I cut out and saved from magazines in the 80s and 90s! This was quite hard because they had an almost archive-like quality - really captured the styles and shapes of a bygone era (albeit an era when crazy bright colours, boxy oversized shapes and shoulder-pads were all the rage). I did keep a few old favourites and a few "classic" examples, but rationalised that as I still have my knitting book collection (which spans the last thirty years or so - Patricia Roberts anyone?) and my treasured Rowan magazines I can always get a blast from the past from them if I need one. See, I'm getting good at this now!

Which is just as well, because soon I will have to tackle the really tough areas - craft materials and wardrobe - a.k.a. the 'Boss' levels (in old-school video-gaming parlance). "But it might come in handy/fit you again one day...But it cost a lot of money/you've only worn it once". Shudder. I have so much empathy for the people who feature in programmes like "Hoarders" when the voices in my own head start clamouring.

In other news, my knitting has ground to a halt in the past couple of weeks. Although most of my energy has gone into the de-cluttering, I think it's partly because I've lost confidence in the cotton jumper I started, and don't like the way that the fluctuations in tension where I've put it down and picked it up again are so obvious in the plain stocking stitch fabric. 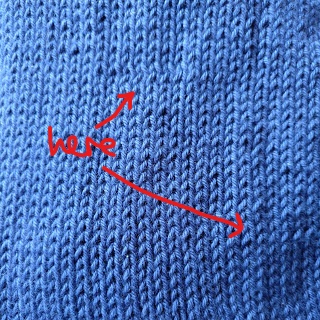 Cotton is much less forgiving than wool. No elasticity. Even when I try to adjust/correct the the offending stitches it still doesn't look quite right. It will probably (hopefully) even out and look ok once it's been washed and worn, but it really bugs me in the meantime!

Speaking of bugs, this is a photo I took of an enormous brown moth that came clattering around the lampshade one night last week and was briefly captured in a glass before being released into the darkness. I couldn't identify what type it was, but it was a magnificent beast with lustrous, velvety, tapestry wings. 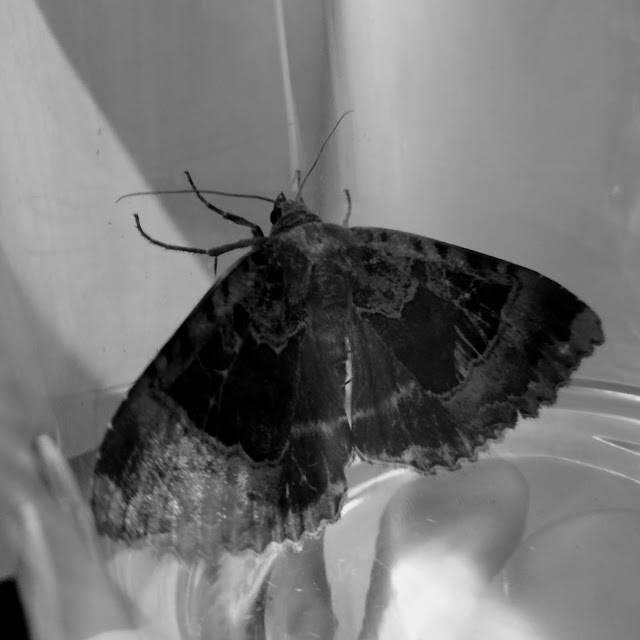 The beauty of photography nowadays is that you can take as many photos as you like without them occupying anything more than virtual space in an imaginary cloud. My current preoccupations are collecting fallen leaves... 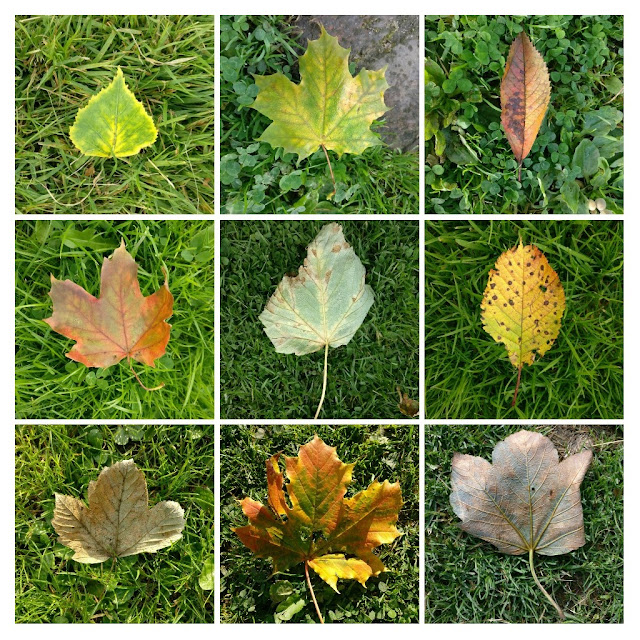 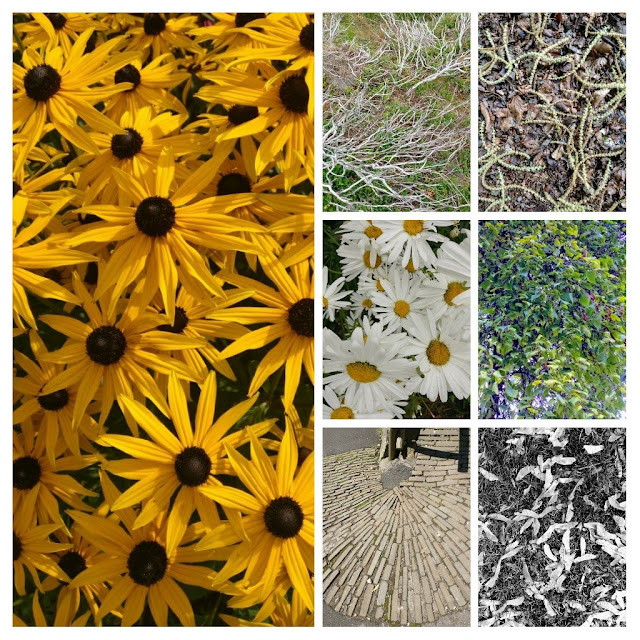 ...and capturing moments along the way - like this morning's walk: 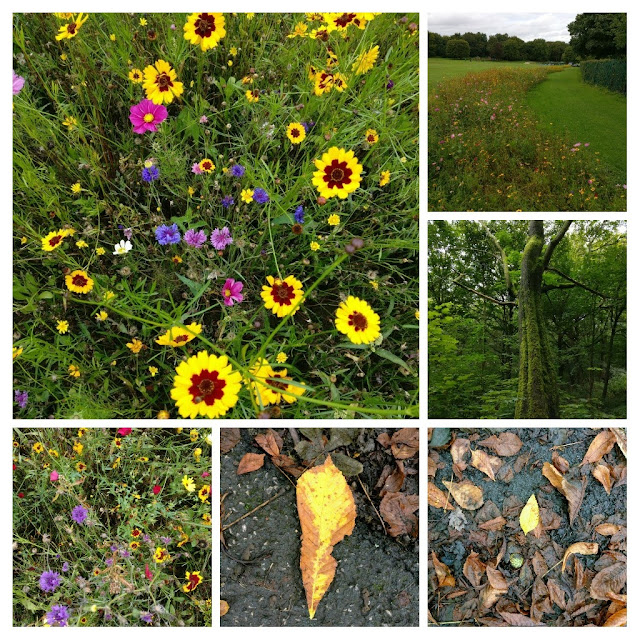 The XXSCat dog demands a fair bit of attention too. 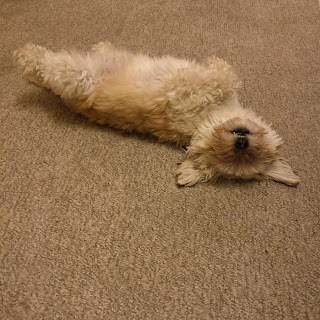