The Friday before last was Light Night in Leeds. We've been going along for a couple of years now, and each time I feel a little burst of pride in our city for making this wonderful (free) event possible. My favourite part of the experience is always the amazing animated projections which use iconic city centre buildings as enormous, interactive backdrops. This year was no exception, and glimpses of the magical transformations of the Queen's Hotel and the Civic Hall during Light Night 2019 can be seen below. 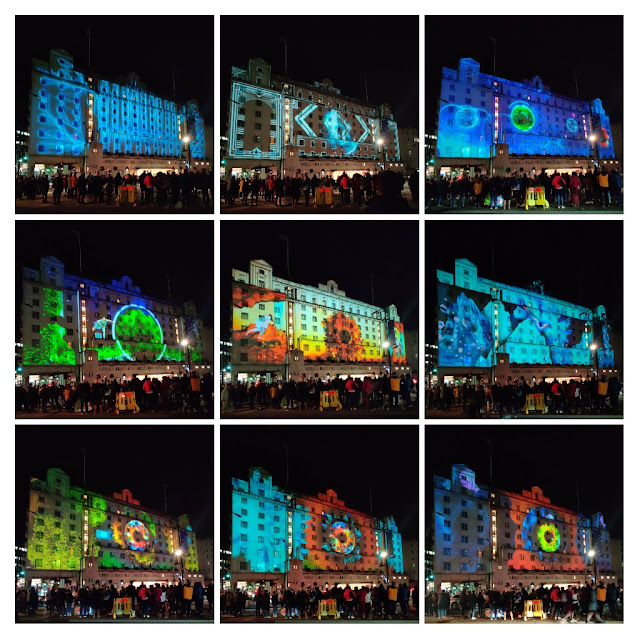 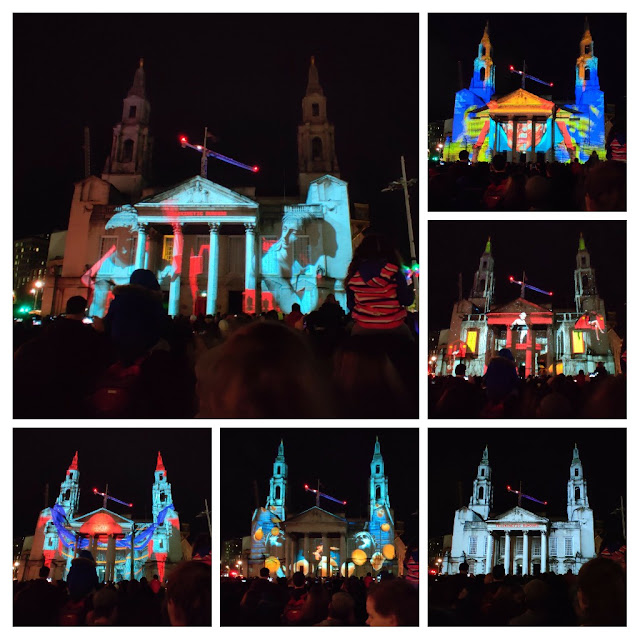 From large-scale projections to zoomed-in explorations, this week I've also been marvelling at the delicate tree-like structure of the veins in this well-rotted ivy leaf from the back garden... 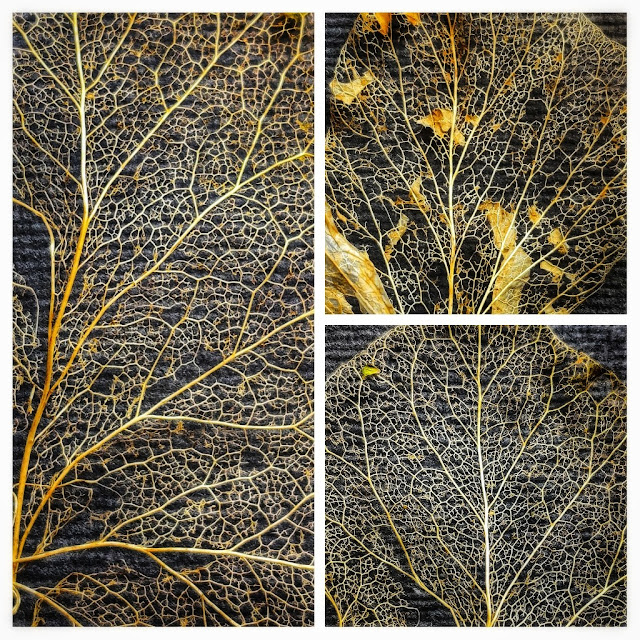 ...and gloating over the 'blue eryngo' seeds I collected at the park, ready for sowing in the garden next year. 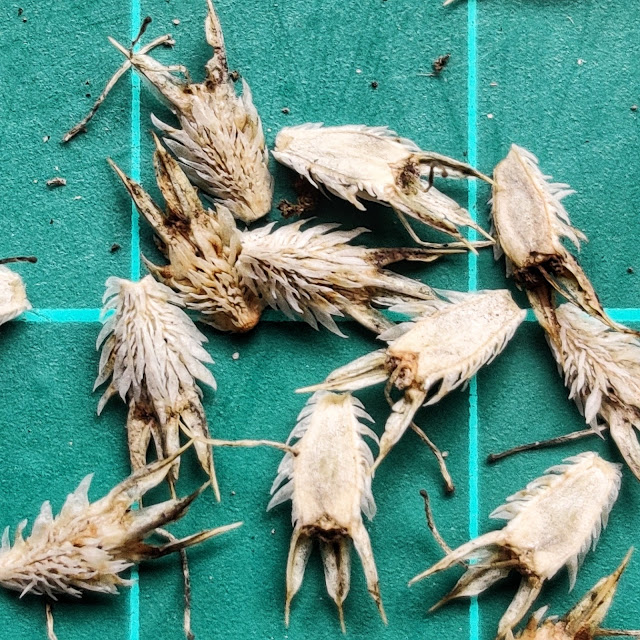 I literally can't wait to feast my eyes on that prickly lilac-violet-lavender loveliness in my own back yard, and (hopefully) neither can the local bees! 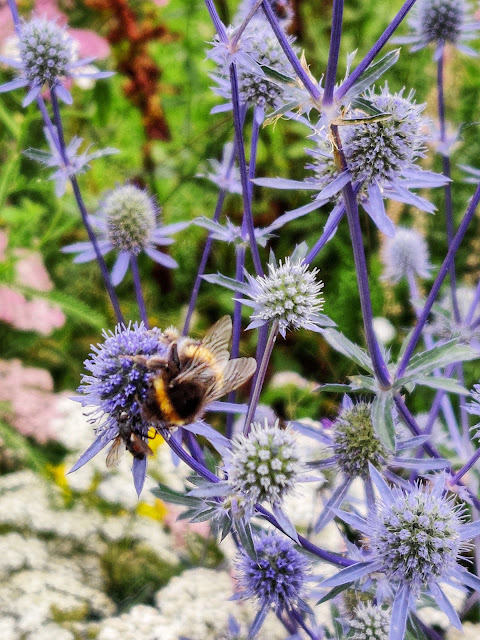 Finally, a bit of whimsy - in the shape of a little wooden peg doll in a quirky hooded cape, from the 'Nestled' pattern by  Hunter Hammersen on Ravelry. I haven't decided whether to make a leafy sleeping bag to match just yet, but these spiky sweet chestnut seed cases make rather fetching accessories in the meantime. 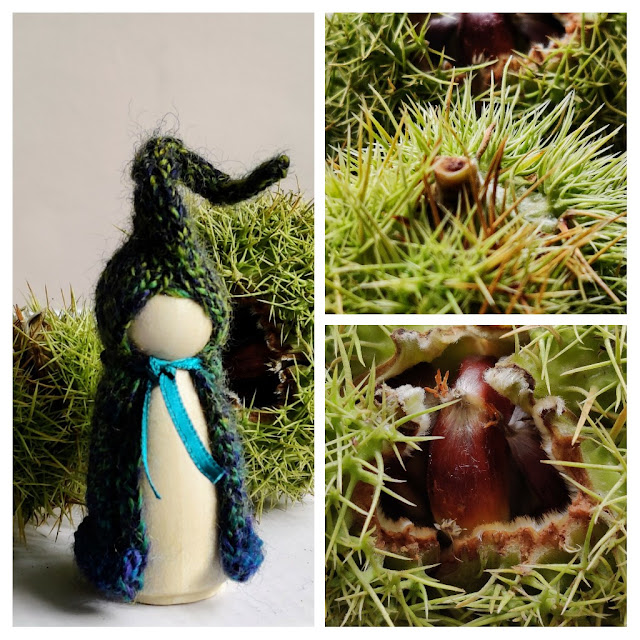 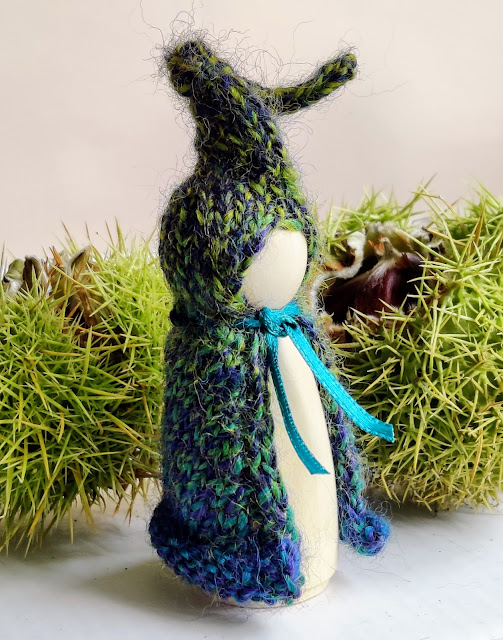 This week I have been ever so slightly obsessed with a garden spider who briefly staked a claim on the patch of airspace outside my craft room window. She was about the size of my little finger tip - big enough for me to notice her busily completing her web, and to decide to go outside to investigate. This is what I found, strung across the 10ft gap between the two washing lines, about 8ft up in the air: 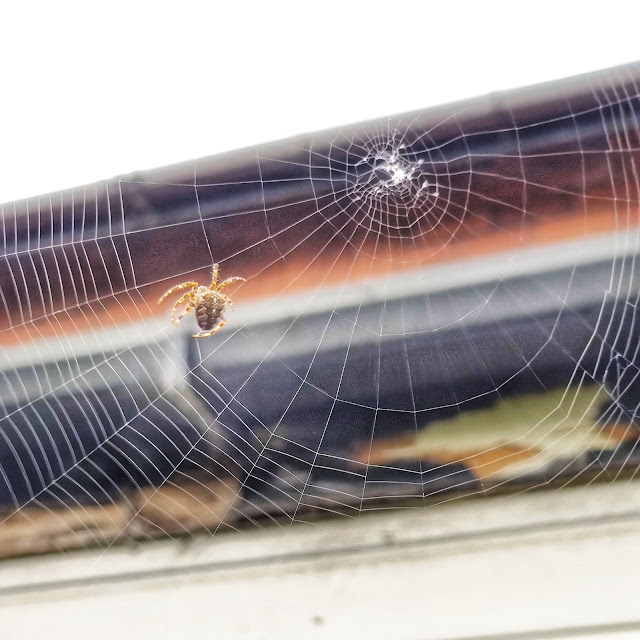 It took forever to get a decent photo - partly because she was moving so quickly, and partly because it was a very windy day. By the end of the afternoon the wind had torn the web apart and the spider had taken shelter under a leaf on the rose bush. 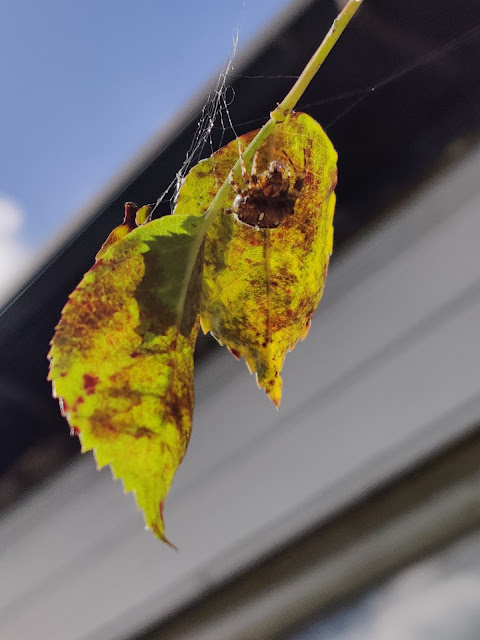 Meanwhile, indoors, I upcycled a knotted string belt - never worn with the garment it came with (due to the unfortunate 'sack of spuds' effect it created on me), but kept for the unusual shell beads, which were sure to come in handy for something! I sanded and painted the wooden beads and then restrung them on some waxed cotton cord to make a decorative pull-string for the bathroom light. Sure enough, those beads came in handy. 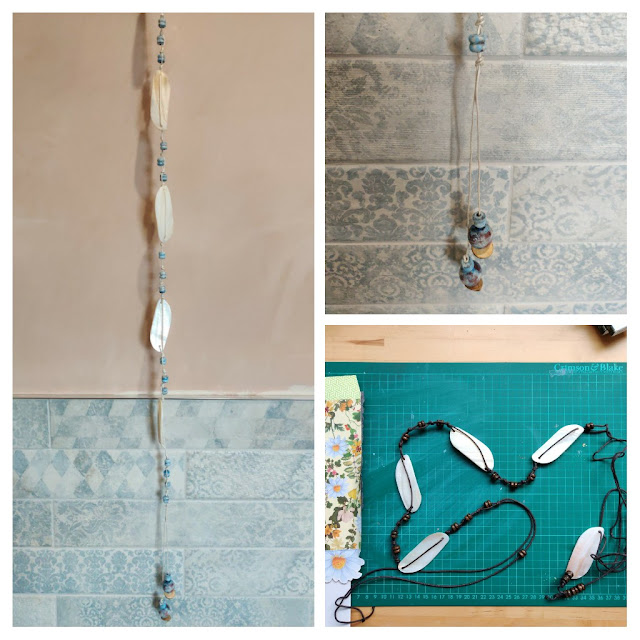 The following day the wind had died down enough for the spider to have reinstated her web, and I managed to get this shot of her against the trees... 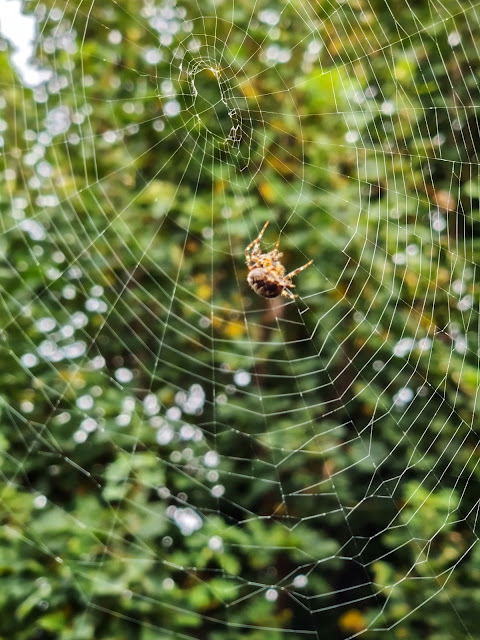 ...before "down came the rain and washed the spider out". She set up home temporarily in the space between the rosebush and the fence to wait for better weather. 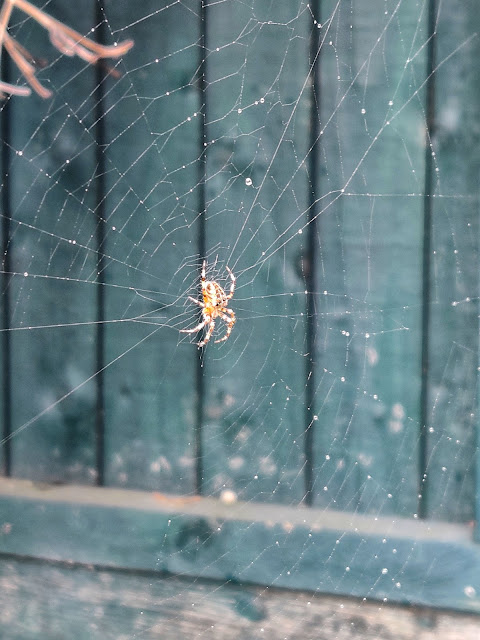 Back indoors I got around to taking a photo of my completed Felix jumper, already worn and washed several times due to its comfiness. I am so pleased that I persevered with this project. I bought the yarn back in March when we had our trip to Haworth, and then deliberated for quite some time over choice of pattern. I have a bit of a mental block when it comes to making adult-size garments - I start off full of enthusiasm, and then boredom and/or self-doubt sets in and I end up abandoning/frogging them. This jumper was no exception. I got halfway down the body, began to question if it would fit/suit me and set it aside to focus on other things (assorted scarves and dolly jumpers!). So it languished for a couple of months in a half-completed state, making me feel guilty, before I had a stern word with myself and actually succeeded in finishing it. The fact that I like it enough to actually wear it makes me want to attempt another one. Perseverance definitely paid off. 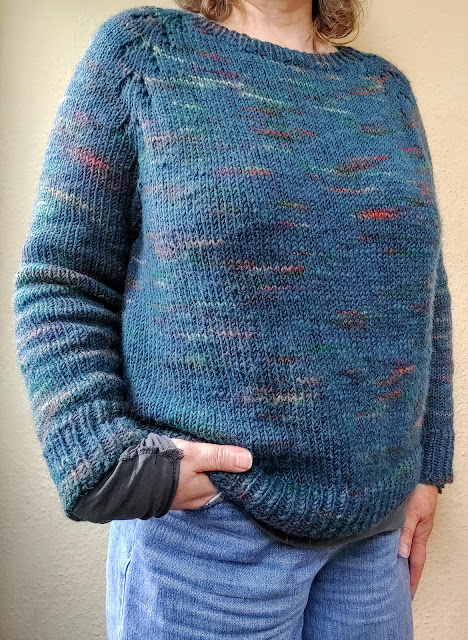 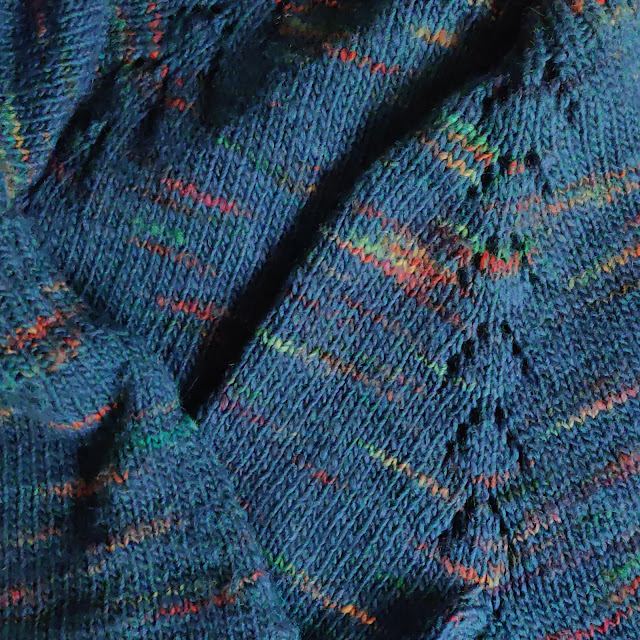 Speaking of which, a new day means a new web for an industrious garden spider, and the next one was a real beauty, with tightly woven spirals. As she was keeping very still, lying patiently in wait at the centre of the web, I managed to get this photo showing her lovely 'diadem' markings. 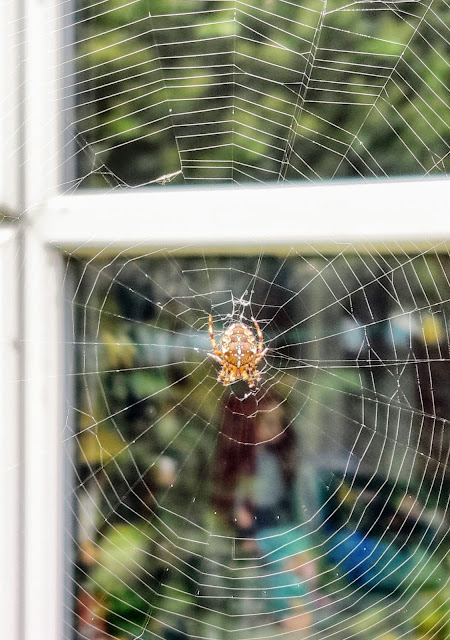 The following day the wind and rain had wreaked havoc with the web - only two thirds of it had survived. As I approached to have a closer look I must have inadvertently brushed against a trip wire, because the spider beat a hasty retreat to the rose bush, although she continued to monitor movement further down the line with one delicately outstretched leg. Tonight, when I got home from work, the long strand of web spanning the washing lines was gone, and there was no sign of the spider. I'm hoping she's somewhere safe, perhaps preparing an egg sac in the ivy on the garage, where the spiderlings hatched in May. I'll miss watching her making her webs outside my window - wonder if she enjoyed watching my making too?! 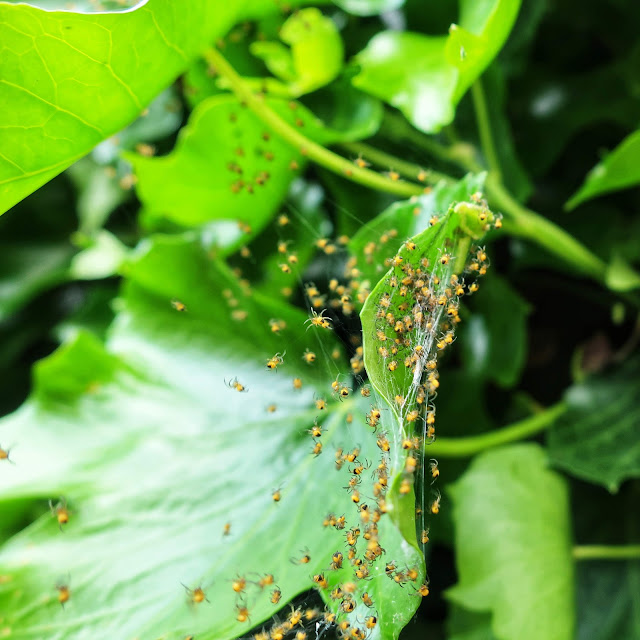