1. On the Wednesday, at 8am, I got a panicked call from my Mum, to say that my Dad was having severe abdominal pains and had collapsed in the bathroom. I told her to phone an ambulance, then raced round to their house to wait with them until it arrived, around 40 minutes later. We then spent 12 hours at the hospital, in a scarily crowded/chaotic A&E department, where it was eventually decided that there had been a problem with the inguinal hernia he has been nursing for nearly three years, which had (thankfully) "resolved itself" without the need for emergency surgery. We decided that, on balance, even though the start of the day had been horrific, the outcome was almost worth it, as he was seen by a consultant who recommended he be booked in for a planned hernia repair operation in 4 months' time (allowing 6 months recovery time after his recent heart attack). Being free from near-constant hernia discomfort will be wonderful for him. 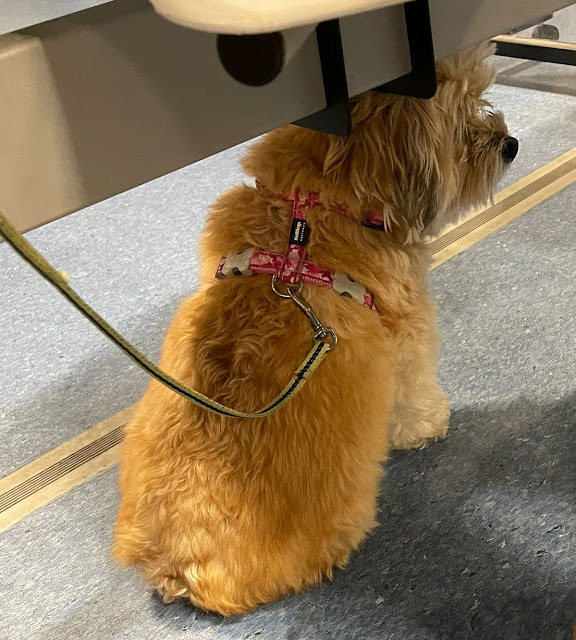 We felt incredibly guilty for not having picked up on the problem sooner - she had been very quiet and refusing to eat all day, but this wasn't completely out of character for her, and we'd put it down to the oppressively hot weather affecting her appetite. She's never had any issues like this before, but extensive post-incident-Googling (bordering on doctoral research) has taught me that anal gland problems are actually quite common in small dogs like her. It didn't help that she hadn't displayed any of the tell-tale behaviours that generally signal something amiss, which apparently include bottom-scooting and obsessive bottom-licking, in case anyone is interested!

A strict, round the clock, nursing regime was put in place: co-codamol tablets at 7am, 3pm and 11pm, penicillin at 11am and 11pm, anti-inflammatory syrup at 11pm, nether regions bathing in warm water several times per day, and anti-bottom-licking devices installed. The grey Cone of Despair was briefly trialled (OMG, those accusatory eyes)... 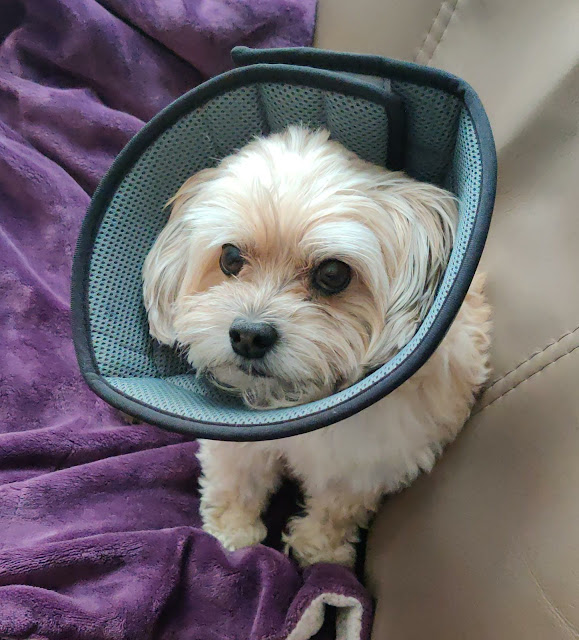 ...but was ultimately rejected in favour of the inflatable Comfy Collar (rather like a travel pillow for dogs) which earned her the nickname DCI Doughnut of Paw Patrol, seen here repawting for duty... 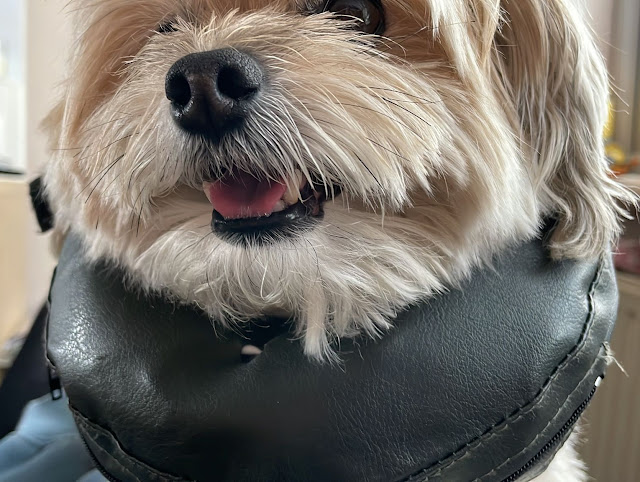 During off-duty moments she assumed the Inverted Draught Excluder position, making it possible for her to segue seamlessly from naps to belly-rubs without moving a muscle. 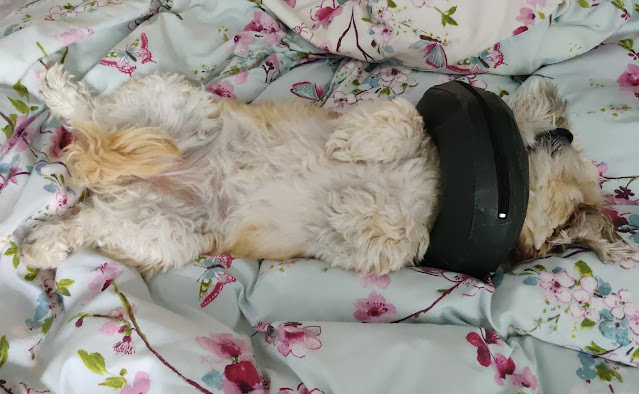 Ten days after the abscess was first detected (on the Monday), she was given a clean bill of health by the Vet, and we all breathed a massive sigh of relief. We're just not sure if she will ever be able to sleep normally again... 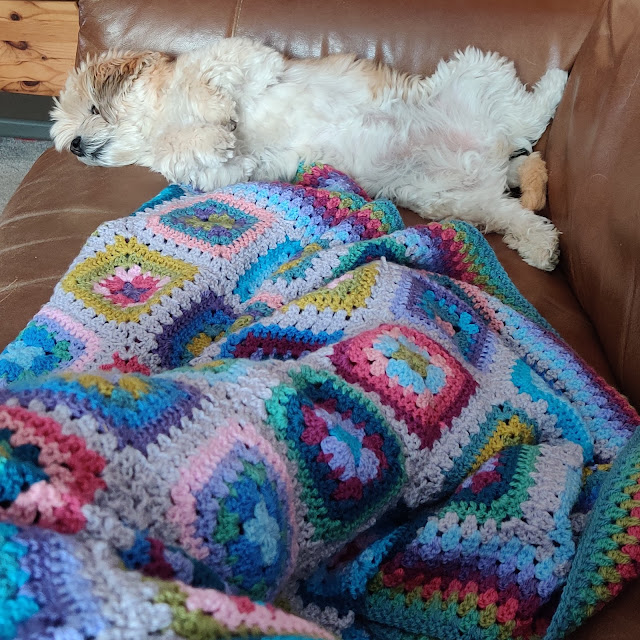 3. The following day (the Tuesday) my daughter tested positive for Covid, and four days later (the Saturday) I was testing positive too, both of us having finally run out of luck, two and a half years into the pandemic. I can't say that either of us have been severely unwell, but we've both felt pretty rotten at times, and I am so very glad to have been fully vaccinated and boostered, and to have been infected with the 'milder' Omicron variant, because the original strain could have been a whole different ball-game. Although we're both testing negative now, two weeks later we're still coughing, and I keep running out of breath mid-sentence when I talk! So we're taking things very slowly, hoping to dodge the dreaded Long Covid.
I knew I'd turned the proverbial corner when I felt like I could take a break from lying in bed/on the sofa, binge-watching The Office (US version) with my daughter, and start making things again: 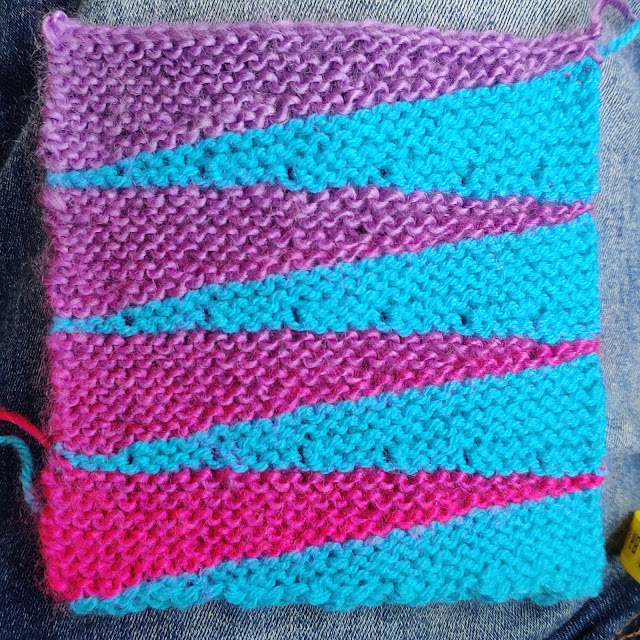 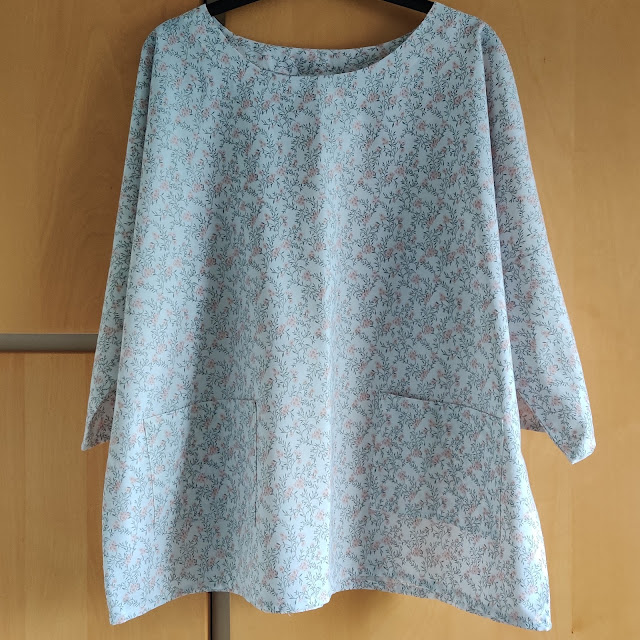 Without wishing to Tempt Fate, I'm rather hoping we'll be Trouble-free for a little while now...but if not, we'll always have The Office.
Posted by Little Dorrit does... at 03:48